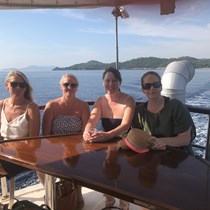 Weʼve raised £4,325 to support April with her recovery from major surgery & six months of Chemotherapy for Bile Duct Cancer.

April was absolutely fine at the end of January 2019 she had just started her new job before Christmas being as social as ever & life was good, she then started to notice how tired she was becoming & a change in her skin colour.

April was concerned by these symptoms as they esculated quite rapidly so went to see her GP straight away they said she was jaundice & referred her to the hospital for tests, over the next few days April had every test you can imagine to find out what was causing her symptoms.

On one of the scans they noticed that her bile duct was enlarged it should normally be around 2cm & was measuring 22cm this is what was causing the jaundice as the bile duct was blocked, the next step was to have a stent put in to relieve the symptoms she was suffering.

It was at this point it began to dawn on all of us how serious this could be as after the procedure April met Shelly a Macmillan nurse who explained there is a good chance that this could be cancer.

The next step was to meet a surgeon called Dr Kumar in this meeting April was told she did have a tumour in her bile duct & that she would need surgery as bile duct cancer was very rare & very agressive.

The surgery she would need was major it is called the whipple procedure this is where they remove the head of the pancreas, the first part of the duodenum, the gallbladder and the bile duct the surgeon then reconnects the remaining organs to allow you to digest food normally.

Before this operation April needed to have two more scans to see if the cancer had spread to any other location in her body, a few days later she got the news that it hadn‘t so the next step was to go & see Dr Kumar at The Royal Surrey County Hospital in Guildford to meet the team Who would perform the operation.

April had the surgery on the 6th March this lasted 11 hours but we received the news that night that it had gone as well as can be expected, each day April is getting stronger after the operation Dr Kumar confirmed it was one of the biggest tumours he had ever seen but there is still a long road ahead as April will have to go through six months of Chemotherapy.

This has been extremely tuff few weeks for us all to watch April go through this she has amazed us all how strong & positive she has been & still has her wicked sense of humour.

One area that has caused April concern is having just started a new job she isn’t entitled to sickness pay she is the sole earner & has a mortgage & bills to pay after making enquirys at the Olive Tree Cancer support if you are a home owner there is very little financial support out there.

So this is where we all come in over the next few months there will be many events happening for April so we can raise her some money to support her through this tuff time in her life & take that worry away.

In return for donations to support April myself, Suzi & Lisa have signed up to do The 50k Thames Path Challenge on The 7th September 2019 on telling April we were doing this for her the language was very colourful which i cant put on here she would rather we went down the pub but she was incredibly overwhelmed.

We would be very greatful for any donations to support April so she can focus her energy on beating cancer.

Thank You So Much!