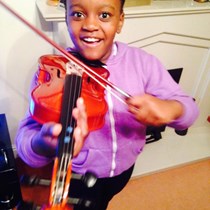 I will be running the Windsor half marathon on the 19th of May. I have committed to run this extremely hard race to help raise money for my cousin Irene to tick off one item off her bucket list.

Irene Nakisai was born normal and fully able bodied until when she was 7 years old. Irene started having sight problems which the opticians could not initially diagnose.

She was referred to the genetic ophthalmologist for further tests. As she was going through the genetic test Irene started to be unsteady on her limbs. We highlighted this to the doctors who then combined the two and the genetic test results were devastating. She was diagnosed of a rare and untreatable genetic disorder called Spinocerebellar Ataxia Type 7 in October 2016. This was the worst day of our lives as we were told that the condition is degenerative with no cure

Irene was declared Severely Visual Impaired in Nov 2016, as she had lost more than 80% of her sight. She became fully dependent of the wheelchair in July 2017 as she struggled with mobility.

Since then it took us some time to come to terms with our predicament. We knew we had to be strong for Irene and of which we are now.

We have always known that Our Irene likes travelling and one of her future dreams was to travel the world. In the past couple of years her parents have taken Irene to Zimbabwe and USA as these are part of her Bucket list destinations. The next trip we wish to take her is New Zealand to visit her aunt and uncles who stay in Christchurch. She really wants to go visit her and visit NZ.

Irene’s mobility has since deteriorated but still in good spirits. She fully depends on the wheelchair and aided movement for small distances.

On behalf of my family I would like to appeal to you to help us raise the fund for airline tickets so that we can fulfil Irene’s wish list while she still can. The biggest challenge for us is to afford the air travel tickets for her to travel long distances (over 24 hour journey).