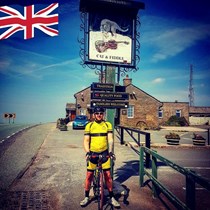 Weʼve raised £3,085 to Staffordshire Regiment Association Cycling Club are raising £2000 in support of the Motor Neurones Disease" and for ‘Help a Squaddie’

On the 18th September 2019, the SRACC will embark on a 400-mile bike ride from the Staffordshire Regimental Museum in Lichfield Staffordshire to Arnhem in the Netherlands ,to commemorate the 75th anniversary of the Battle of Arnhem which was part of Operation Market Garden in WWII.
The Battle of Arnhem was a major battle of the Second World War. It was fought in and around the Dutch towns of Arnhem, Oosterbeek, Wolfheze, Driel and the surrounding countryside from 17–26 September 1944. You may be familiar with the Film ‘A Bridge Too Far’ which tells the story of the battle.

The Challenge will be broken down into the following legs.
Day 1 – 100 Miles - The first leg of our journey is from the Staffordshire Regimental Museum to Woodhall Spa where the 2nd Bn South Staffords were based before the battle and deployed on the 17/18th September 1944.
Day 2 - 70 Miles - Woodhall Spa to Hull (overnight ferry). Prior to leaving the SRACC we will be laying a wreath at the 1st Airlanding Brigade memorial. The Club’s own Bugler will sound the ‘Last Post’
Day 3 – 100 Miles - Rotterdam to Arnhem
Day 4 - 20 Miles - Day of commemorations at Arnhem /Oosterbeek, this will include crossing the ‘John Frost Bridge, memorial at the ‘Lonsdale’ Church at Oosterbeek and laying wreaths at several CWGC Cemeteries
Day 5 -100 Miles Final ride back to Rotterdam from Arnhem and Ferry.
Day 6 – Return to Lichfield by Road Transport to Regimental Museum Lichfield.

The Charities, the Club have decided to support are:
The Motor Neurones Disease Association

Help a squaddie - A None profit Organisation based in Rugeley Staffordshire. founded in Sept 2015. Their main objective is to help struggling Veterans