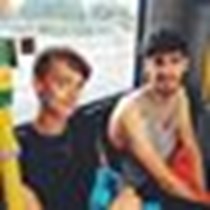 Weʼve raised £836 to help me fund my film project

Berlin
Creative arts and culture
Funded on Thursday, 9th May 2019

I am about to complete a film course here in Berlin - for my final project I will be making a short film. I have written the script and am at the pre-production stage, involving creating storyboards, scouting locations, and auditioning actors. Part of the reason I wanted to do the course is because I already had a clear idea of a story I wanted to tell.

The film is about the collapse of East Germany. Uniquely, it also touches on the nostalgia felt by those living under the regime - known as "Ostalgie" in German.

In order to make this film I am seeking help towards my budget. Any contributions small or large will be massively appreciated. I am so looking forward to fusing what I have learnt on this course with my fascination for German history. I will be funding some of the project myself, but your contribution will help it be that much more professional. I will begin filming in March and am aiming to finish the project by May.

Anyone who donates £100 or more will be mentioned in the credits as an "executive producer". If you wish to remain anonymous then please contact me with your name at artiemead@hotmail.co.uk. I will be screening the film here in Berlin, followed hopefully by a screening in London, to which you will all be invited!