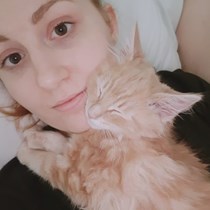 On 9th March our lovely little 4 month old kitten managed to get himself into a room with an open window. Curiosity got the better of him and unfortunately he fell the 4 stories onto the concrete bellow.

When we found him minutes later he was yowling in pain and had laboured breathing so we rushed him straight to the vets who immediately took him to the back for an assessment.

Initial X rays showed some broken ribs, a haemothorax, a collapsed lung and possibly a diaphragmatic tear. Bloodwork showed he had a kidney injury and was becoming very sick. He was put in the oxygenated incubator and hooked up to IV fluids and painkillers.

Later that day the vet rang us and confirmed that he did indeed have a diaphragmatic tear and at least his stomach was in his chest, which explained the respiratory distress. The only option was emergency surgery, planned to be done the following morning, or overnight if he deteriorated. They warned us this operation has a 40-60% mortality rate. We prepared for the worst. :(

Luckily he survived the night and was operated on successfully. They actually found all of his liver, spleen and stomach in his chest squashing his lungs! He also had a spleen tear, and kidney and pulmonary contusions but they would recover on their own.

Artie recovered miraculously quick from the operation and was discharged home 24 hours later with nothing but a big scar and a collar. Unfortunately vet bills don't come cheap, with even one dose of painkiller costing £15! Even though his is insured for accidents, it does not cover all of the costs.

We are raising money to try and cover the extra costs and so he can have all the follow-up care he needs. Please give as little or as much as you want, and only if you can afford to do so.

Hi i am Artie's meowmy. We got Artie in the new year and i literally can't imagine my life without him now. I am currently in my last year of medical school so money is extremely tight :(