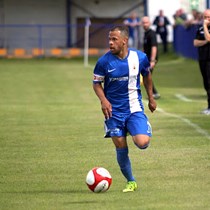 Hiya my name is Astley mulholland currently playing for evostick side Glossop north end Fc
I'm wondering if you could help me out for this massive cause...
11 years ago my brother passed away through cardiac arrest whilst playing football...a truly massive shock to the family in which we are all still not over.
i believe if there was the right equipment there or trained personnel my brother my have survived this and I'm going to try and make sure this getting the right euiptmemt etc can decrease the percentage of lives being taken as its in the first 10 minutes of a cardiac arrest that is crucial and with the use of a defibrillator enhances people chances of living massively
As you well kno this happened to fabrice muamba who thankfully survive yes all be it someone in the crowd and they was medically trained but surely if its occurring at least once a season should be a massive eye opener right???

As you can gather it is now becoming common in sport and I'm looking to raise awareness and help for this to to set up some sort of charity and receive financial backing form yourself in terms of faster response times in terms of defibrillators, the rightly trained people for cardiac arrest and maybe some sort of medical at the start of every season for all non league player/semi pro players and for grass roots football.
Yes this may cost money and time but what is money and time if it saves someone's life every season
Yes it may mean people may have to quit the sport they love doing but at least families haven't got to live with the heartache for the rest of their lives at the passing of one of their family members
As you may or may not know know this happened last night on 12th September 2016 as Shaw land Aqua force were playing brighouse town in a cup match and one of the shaw lane player Daniel wilkinson aged 26 sadly suffered from a cardiac arrest in which resulting in his life being taken.
#raisingawareness #savinglives
#cardiaarrest 🙏🏾🙏🏾🙏🏾