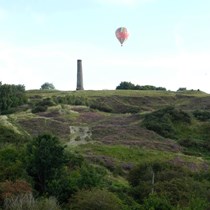 So many people walk, jog and cycle along the River Avon Trail who might need this life-saving device. Defibrillators are an important step in the chain of survival following a heart attack and the nearest other defibrillators, accessible to the public at all times are currently in Hanham and at Crofts End Church.

The project is fully supported by many local community members including Julian Thomas, a Community Park Keeper on Troopers Hill from 2007-14. He now volunteers as Chair of Friends of Brislington Brook. In 2009 Julian suffered a series of heart attacks not initially realising what they were. His heart later stopped and a defibrillator was used to bring Julian back; a pacemaker now keeps his heart "ticking over". We just feel so thankful that Julian did not suffer his heart attacks on Troopers Hill where he might not have been found until it was too late.

If you would like to fund raise for this project in any way (i.e. running sponsorship, holding a bake sale etc) please do contact us . If more donations are received than the target, the surplus will go to the Ways to Nature project.

Didac Ltd have over 10 staff who are qualified first aiders. Their business is training people in furniture and wood-working skills.

Friends of Troopers Hill was formed by a group of local residents in 2003 to provide a friendly community focus for people who care about Troopers Hill.