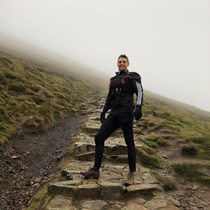 Weʼve raised £6,676 to Support local charities in the UK and Sweden that are close to our heart, by doing the National Three Peaks Challenge on the 13th&14th June

A team of Axis employees with a desire to support some worthwhile charities are attempting to complete the National Three Peaks challenge.

So what does it entail? This involves scaling the three highest peaks in England, Scotland and Wales - Scafell Pike, Ben Nevis and Snowdonia. To put this into perspective, it involves walking nearly 26 miles (similar to a marathon), with a total ascent of 9,800 feet (3000m) and driving 450 miles in under 24hrs. Now driving on UK roads in under 24hrs may seem like a challenge all by itself, but we’ll attempt to complete the walk as well.

It is reported that there is a 25-40% failure rate for people attempting that National Three Peaks challenge, and only 40% of those that complete it do so in less than 24hrs. The average time is around 25.5hrs. So what’s the reality of a team of fairly unfit middle aged (I’m giving some in the group the benefit of doubt here) individuals from Axis, actually doing this in less than 24hrs hours? Probably very slim, but we’re a determined bunch, mostly overweight, so this is a good excuse to get fit and raise some money for some fantastic charities. What is universally agreed, is that plans should never be made after a few beers at a Christmas party.

So, after a few conference calls and some creative justification to find reasons why not to do this, we are left with a willing team and date set for June 13th. We’ve selected charities close to our heart and even put a training regime in place, as apparently this is a lot harder than it sounds. We have even had a colleague, Peter Dempsey, that has recently returned from scaling Mount Kilimanjaro as preparation for the Three Peaks challenge.

Now a little about our chosen charities.

PTSD Resolution helps ex-service men and women who have mental health problems, including post-traumatic stress disorder, following service in the UK armed forces. The service is available to all veterans of the UK armed services, TA, reservists and their dependents.

We are an independent charity that aims to work with the people other services do not reach or have not been able to help. We work in prisons, for example, and we are generally able to work with traumatised people who have alcohol and drug problems, provided they are able to engage in therapy.

The programme involves a series of one-hour therapy sessions on a one-to-one, out-patient basis, to relieve veterans of disabling symptoms. A single course of therapy is generally all that's required.

For those clients who engage with the therapeutic process and meet their appointments the outcomes from PTSD Resolution are good, even when the trauma is long-standing and severe.

PTSD Resolution treatment meets a special need of veterans and reservists in that it can be carried out without the therapist or anyone else ever knowing about the events that caused the trauma. This ensures confidentiality, protects the patient from further distress, and protects therapists from hearing about large numbers of often extremely disturbing incidents. These are important safeguards.

We are also doing new research and raising awareness of the causes and treatment of post traumatic stress. PTSD is little understood by veterans and reservists - or their families, friends or employers, the people who are often very much affected by the destructive behaviour associated with the condition.

The Swedish Childhood Cancer Fund works to ensure that affected children, teens and their families receive the care and support they need.

The Swedish Childhood Cancer Fund was founded in 1979 by parents of children with cancer, with the aim of creating a more hopeful future for children and teens diagnosed with cancer.

In the 1970s, a minority of children diagnosed with cancer survived. Today, almost 40 years later, the Swedish Childhood Cancer Foundation is the largest financier of childhood cancer research in Sweden and today more than 80 percent of the affected children survive.

The vision of the Swedish Childhood Cancer Fund is to eradicate childhood cancer.

As a charity, we provide free, specialist care for adults in Luton and south Bedfordshire, and children from Bedfordshire, Hertfordshire and Milton Keynes, who have life-limiting and terminal illnesses.

Our excellent specialist care supports adults and children to live pain and symptom free, to spend untroubled time with their family and friends, to understand what’s happening to them, to stay out of hospital and to make the most of the time they have.

We plan to offer training updates up until the day we climb, which will hopefully keep you amused, along with progress throughout the day.

So really make a difference by donating to some fantastic charities and recognise our motivation and commitment by giving us a no return option, your support will be hugely appreciated.

Please note, we have set up the fundraising as a crowdfunding page, so we can donate to three different charities and split the donations equality, rather than setting up three different pages.