Weʼve raised £610 to restore a slate plaque commemorating the crew of an American bomber which crashed above Penmaenmawr on January 7th 1944.

On a windswept plateau in the hills above Penmaenmawr is a memorial tablet dedicated to five American airmen and their dog, a terrier called Booster, who were killed when their Liberator bomber crashed in low cloud on the 7th of January 1944.

The aircraft, nicknamed ‘Bachelor’s Baby’, had left RAF Valley earlier that fateful afternoon to fly to RAF Watton in Norfolk when it struck a ridge, crashed and burst into flames. The plane was carrying a cargo of ordnance and ammunition and on impact turned the crash site into an inferno. Miraculously, six airmen survived the crash and were helped to safety by local farmers and quarrymen.

January 2019 marks the 75th anniversary of the crash and Penmaenmawr Museum and Home Front Museum, Llandudno would like to restore the memorial plaque to its original condition. 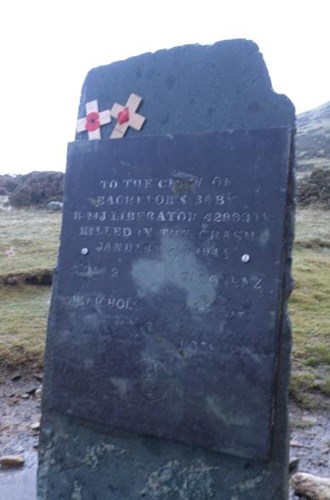