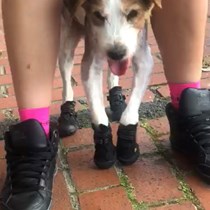 Mr. Bags had a spinal stroke (also known as FCA) on the 28th of June 2018, leaving him unable to stand or walk. The vets had litte hope that he’d recover from it, due to him being 14 years old. They tried to prepare me for the worst but i decided to give him time, inform myself about the condition and explore all options on social media and look up veterinary specialists for possible surgery and rehab. It looks like it was the right decision.

Bagsy was injected with a very strong painkiller on the day of the incident and was spaced out for nearly 24 hours. After the painkiller effect started fading, he started gaining strength and moving his legs.

On Sunday, with help, he managed to stand up.

On Monday we got him a special sling to help him walk and he showed great progress. On the same day we visited the vet for a follow up and they were jaw dropped seeing Bagsy walking in the surgery at RVC in Camden. They said he has progressed remarkably and he has good chances of recovering fully! Such a strong boy! They advised that we don’t need to rush into very expensive therapy options just yet, as we need to monitor his progress while he will be on medication and doing physio exercise. If he doesn’t show further improvement or if he gets worse, he may beed neuro surgery by a specialist but we need to wait and see how things go.

Over the weekend i managed to borrow a wheelchair from the charity “Winston’s Wheels” which is due to arrive tomorrow 2/7, to help him do some exercise and help rebuild strength.

Bagsy’s insurance (MoreThan) wont cover more than £3,000 for the condition and will only cover up to £500 for hygrotherapy within that £3,000 limit, which will possibly be needed later to help him regain strength.

He will also need full day care (dog sitting) for 8 hours a day, which doesn’t come to less than £40 per day (£800-1,000 per month). He needs that because he cant walk or stand on his own which means that he needs help to go to the toilet, eat, drink, get up/sit down and do his exercise. In cases like this it could take anywhere between 1.5-3 months at least, which means that for dog sitting alone, for three months he will need at least £2,400 - £3,000 for dog sitting services alone and that expense is not covered by insurance.

Once the vet sees that the time is right, he will need hygrotherapy to help rebuild his muscles and regain strength.

Typical hydrotherapy rates come to about £50-60 for initial consultation and then a bit less than £30 per session. (Rates from the Goddard Vet Group https://www.goddardvetgroup.co.uk/hydrotherapy/). In addition to these expenses, transport to the facility will also have costs, which is estimated at about £20 per visit. Doing one session per week, means that the expenditure will be a minimum of £200 per month, £600 for an estimated three month rehab period.

I’m in the difficult situation to not being able to provide all this to my beloved companion and best buddy of the past 14 years of my life. I hate to think that i should lose him because of money. I have managed to raise him on my own with little help from family because we don’t live in the same country and some help from friends over the years, which has been priceless. If he had given up, i’d end this so he doesn’t suffer and until i got to see his improvement, i was terrified that i had to put him to sleep forever..but i chose to wait and give him a chance.. and he won. So now there‘s a lot of work to be done by both of us and get over this, like all the other times we faced medical conditions together successfully when few believed that he‘d make it. Yet here he is.

Those of you who have met him know what an incredible dude he is. He has helped many of my friends and given them comfort when they were having hard times, he always gives people a smile and mesmerises them when travelling on trains or buses..he just makes everyone talk to him somehow!

I’ll be forever grateful if you help achieve my goal. If we exceed the target, while there will be updates on his progress, and if all goes well, the excess will be given to the Charity Winston’s Wheels who help doggies in need by lending wheelchairs to them until they get well.

Thank You! Please spread the word!!