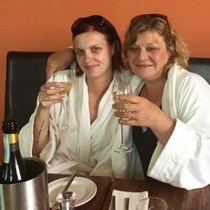 Weʼve raised £780 to have my hair shaved in memory of my beautiful mother-in-law Debbie who lost her brave battle with cancer on 21 Jan 2019. #baldisbeautiful

This is my mother-in-law and children’s nanas story. With your support I hope to raise as much money as possible! Debbie spent her final few days in a beautiful hospice called St Richard’s in Worcester surrounded by her amazing family and close friends and being cared for by the most wonderful doctors and nurses before passing away at 3.05pm on 21 January 2019. We are all left completely heartbroken after losing her.

My mummy bear Debbie Hawker battled breast cancer back in May 2010 at the age of 35 and had a tough battle (see her story in her own words at the end of this message). After 5 long years she was finally given the all clear and has lived cancer free since then, or so we thought. After experiencing some stomach problems just a couple of weeks prior to Christmas she was diagnosed on New Year’s Eve with Liver and Stomach Cancer and given just weeks to live. So while everyone was celebrating the coming year she was writing letters to her children Andrew 25, Jordan 22 Emily 11 and her 1 year old grandson Louie and 8 year old grandson Harley explaining that mommy/nana will have to leave them soon to be with the angels. Debbie was only 45 years old.

After explaining a little of the background, a fundraising evening is being held in her memory on 1st June 2019. We hope to raise a significant amount of money to help this wonderful hospice to help others in the future and also hopefully a little bit for her young family so maybe they can have a little holiday together in the summer. To show my support I am going to be shaving my hair off on the evening - Eeeeek!

If you would kindly donate as little or as much as you can that would be amazing, your support would be most appreciated! I am hoping to raise as much money as possible to show my gratitude to this wonderful hospice and make my amazing mother-in-law proud.

You would be more than welcome to join us for an evening of fab entertainment, music, food and much more and tickets can be brought online:

I was diagnosed with breast cancer in May 2010. I was aged 35. After being told it was probably a cyst I was sent for the routine checks at the hospital. After all the checks had taken place the Consultant told me he was worried. I had to wait 4 days before the results were back. I was surprisingly calm thinking things like cancer don’t happen to me! D-day arrived and I was told I had cancer. It was grade 3 and the lump was approximately 3.5cm. The consultant started telling me the course of treatment that he recommended. I just remember sitting there thinking who is he talking about, surely not me! My mum and partner had come with me to get my results and thank god they did because I didn’t hear another word the consultant said. I remember being taken into the nurse’s room and she went through the treatment she handed me loads of books to read. The rest of that day is a distant memory. I cried for days on and off. I had to tell my children, Andrew, Jordan and Emily. Andrew was taking his GCSE’s aged 16; Jordan was 13 and Emily 3. Telling my children was especially hard because like me when you mention the word “cancer” you immediately think you are going to die!

I had appointments in June for bone scans and CT scans which all came back clear. They had found micro nodes in my lymph nodes following a biopsy. My treatment consisted of Chemotherapy, surgery and radiotherapy followed by 5 years of tamoxifen.

Chemotherapy started in June 2010. I was very anxious about the whole process and very emotional about losing my hair. Every time the Oncologist or nurses told me that I was going to lose my hair I cried! I had my first treatment and thought actually this isn’t too bad! I’m going to be ok, I can get through this. Shortly after my first treatment my hair fell out in clumps! I remember attending my mum’s 60 birthday and having my hair done etc., the following morning I had washed my hair and when I looked in the bath there was hair everywhere. I made then the decision to go to my hairdresser the following day. She shaved my head. Amazingly and unexpectedly I felt quite liberated! It was almost a new part of my life was in full swing. I think this was because I was in control of my hair and I chose to have it shaved whereas the cancer I had no control! Ironically my partner suffered from alopecia at the same time losing his eyebrow, moustache and patches of hair. This was caused by his stress and worry over me. So we were bald together.

I had 6 weeks of chemo. The more I had the worse I felt. I became very frustrated because of the fatigue and the constant sickness and feeling ill. I picked up colds and sore throats and had terrible mouth ulcers. I had one bad experience following the 4 cycle of treatment when my temperature was very high and I felt very ill. I refused to go to hospital. Looking back this was not a wise move but it was 1 o’clock in the morning. My partner made a point of telling my Oncologist about this and she was very cross with me. She pointed out that they are trying to make me better and by not going into hospital I could have died! This scared me a lot. The Oncologist then referred me to attend a younger women’s group at St Richards Hospice (this would not to commence until after my radiotherapy). After my chemo finished I was then booked in for surgery the plan was to have a lumpectomy. Unfortunately this was not successful as another lump had been located at the back of the original lump, although it was thought that this might have been the original lump dividing into two. I was informed I had to have further surgery. I had to decide on a mastectomy or a breast reduction (mammoplasty) I chose the Mammoplasty. As I was so young the thought of losing my breasts unnecessarily was how I reached my decision. Thankfully this operation was successful at this point I was told the cancer had gone. It was the best feeling in the world the relief that this b******d had been removed from my body! My treatment was nearly finished and there was light at the end of the tunnel! Radiotherapy started in January 2011 and finished in March 2011. Although very different to chemotherapy I did find this treatment very exhausting, as I had to attend every other day. After a few weeks my partner and daughter use to make a day of it and go bowling or play centres. I did have very red area around where I was being treated which is normal and looks like a burn. Weeks after the treatment finished the whole area started to look burnt and distorted but I was told this was normal. Things have calmed down now but there is a difference in colouring etc.

I hit rock bottom after treatment finished. I had started at the St Richards Hospice Group as recommended by my Oncologist. I met some amazing women just like me young who had gone through exactly the same as me! Although I am glad I attended it actually opened up lots of areas that I had not considered. I was scared that the cancer was going to come back. All the thoughts and anxiousness that I was experiencing is very common following the type of trauma I had experienced. I put huge pressure on my relationship with my partner and our future together did not look very good.

However I am happy to say that when I attended Breast Cancer Care Weekend in Birmingham I found my conclusion and by attending it inspired me, changed my way of thinking and I moved on. Without this weekend away I really do feel I would be still in the depths of depression. I met the most amazing people all who had experienced breast cancer. Everyone’s story is different but at the end of the day we were all here to tell the story!!! The speakers and whole weekend was fabulous and it was the best thing to have come out of this whole thing.

I returned to work and life has more or less gone back to normal. Don’t get me wrong I still have prangs of “will it come back”. But my outlook is different now. If it came back I’d deal with it like I already had! I’d kicked cancers butt!!!!