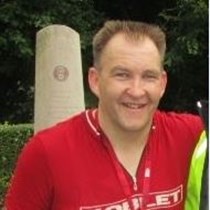 Weʼve raised £1,180 to make a donation to the Basrah Childrens Hospital

During a dinner time discussion in the ARAC DFAC, DBS was entertaining the table with a story of a 15 hour walk he embarked on when last off shift, it included loosing the dog, getting lost himself, a few hours in the pub a guided tour of most of southern england and eventually finding the dog again. In all he ended up walking more than the distance of a marathon in a day.

The natural progression of this story was to challenge DBS to walk 2 marathons, which he accepted. The team then up'ed the ante and they settled on the distance of 2 marathons in under 24 hours. So DBS has now signed up to 52.6 miles / 84.6Km in under 24 hours. With the average walking pace of 4.5km/hr / 2.8mph (on a good day) DBS is in for a minimum of 19 hours walking (non stop...)

He plans to start his challenge at midnight on Sunday 16th June. He will have a GPS tracker on him, so we can track his progress. A link to this will be provided.

We want to take the opportunity of DBS trying not to get lost around southern england (again) to raise some money for a good cause and have settled on the Childrens Hospital in Basrah.

With the plight of children growing up in Basrah making headlines for all the wrong reasons over the past decades we felt that this was a worthy cause we could get behind. If growing up in Basrah was not difficult enough, pre-2010, there was no dedicated children's hospital anywhere in Iraq, let alone one specializing in childhood cancer. To make matters worse childhood cancer rates in southern Iraq are as much as eight to 10 times higher than those in the U.S. To combat the lack of a dedicated children's hospital the US army developed project HOPE with the objective of building and staffing a modern specialty referral hospital with 101 beds for children with cancer in Basrah.

In 2010, the the Basrah Childrens Hospital (BCH) opened its doors. It was the first new hospital constructed in Iraq since the early 1980s and the only dedicated pediatric hospital in Iraq. In its first two years, the BCH cared for more than 26,000 young Iraqis with inpatient and outpatient treatment. The hospital is filled virtually to capacity at any given moment, with nearly 250 pediatric surgeries performed each month and more than 1,000 monthly outpatient referrals. The need for cancer care continues to be a priority for physicians at the BCH. They treat more than 320 new cases of childhood cancer every two years. The BCH is still the only dedicated childrens hospital in Iraq.

Our aim is to raise 5300 GBP for the Basrah Childrens Hospital, 100GBP for every mile DBS plans to walk...

Just a quick Update Due to the weather in England which is rain all week , the walk will now take place on midnight Sunday 16th June , Will give details of tracker many thanks DBS