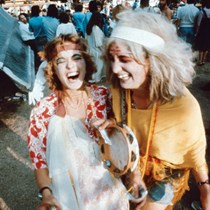 We are creating a book to celebrate the work of Bath Arts Workshop (BAW) from 1969-79. This wildly adventurous and irreverent project included alternative summer festivals that took over the city of Bath with daring street theatre, music, poetry, and alternative technology. And this was only part of it!. There was Rocky Ricketts (the legendary aging rock star and his fabulous Rockettes); the 'Smart Party of Great Britain' led by Sir Rafe Oswick; the 'Normals' - in dinner suits, bowler hats and silver lurex face masks; as well as the occasional weeping brides (see above)! They were all part of a theatre company that was both subversive and inclusive and broke many a boundary in the streets of Bath and Europe.

But there was much more: there were sumptuous Christmas dinners for the old and homeless; an adventure playground; a printshop; fantastical mystery tours for old people, and drama workshops for kids. There was a charity shop and a community transport service. There were geodesic domes and solar panels - the first stirrings of alternative technology. We challenged the status quo in the public domain but also in our working lives. We worked collaboratively with equal pay (when we had the money) and we were all involved in all aspects of the project - lugging furniture up and down Georgian stairways by day, and on stage as glittering rock stars by night (albeit outrageously over the top spoof rock stars!). Massive amounts of work were involved in staging city-wide festivals involving hundreds of performers, rigging lights, building stages and so on; and in the daily routine of running our events and activities. Our book will tell this story - not just a pageant of amazing things that appeared in an unsuspecting landscape, but of the infrastructure that made it all possible and the obstacles we faced along the way.

We have gathered hundreds of fantastic evocative photographs, newspaper cuttings and other materials, and we are writing a narrative account of those times that were so full of optimism and a desire for change. Please support us to document the work of Bath Arts Workshop.

I worked for Bath Arts Workshop (BAW) for 4 years in the 1970s and have joined a group of about 20 fellow ex-BAW members to create and write a book to tell the story of the workshop: How we worked, how we lived and what we were striving to change.