Weʼve raised £340 to Help with a costly operation on Beau

Beau is such a special dog, who has an uncanny ability to lift the spirits of almost everyone he meets. Children seem to be drawn to him, which is surprising, as he's taller than some of them! Many people on Hebden Bridge park know him now, as the bounding bundle of fun.

I rescued Beau when he was 6 months old, and after spending all his life stuck in a room, was certainly glad of the freedom. Now at 3 1/2 he just loves life and everyone.

Unfortunately while playing with his best friend Ratchet, he hurt his rear right leg. The Veterinary surgeon has confirmed he has ruptured his cruciate ligament, 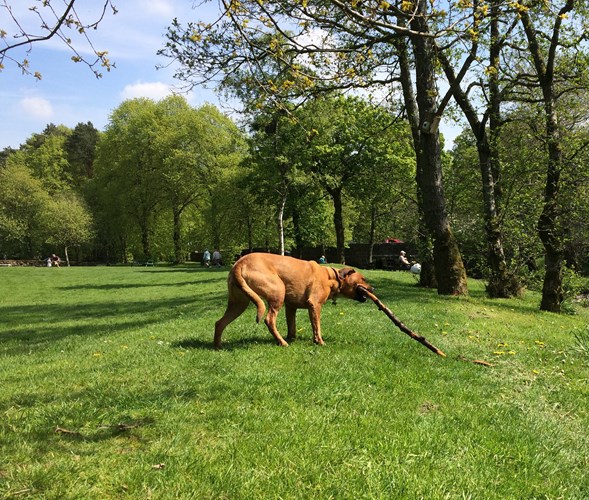 Beau Struggling playing with his most favorite thing.

which is a very expensive operation on a dog this size. I looked at insuring Beau when I first rescued him, but they wanted an astronomical figure, too much for me to afford as I can only work part time.

Many of the people that know and love Beau mentioned crowdfunding as a way to help with the cost of surgery, so I thought I would try it. The vet is unsure exactly how much it will cost but any amount raised here will be a great help.