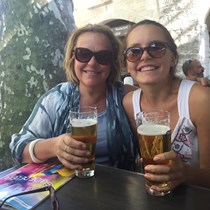 Sport, and netball in particular, played a central role in Belinda’s life as she was growing up. From a young age, she played netball for Morialta Uniting Church (and later Newton Jaguars) - often coached by her mother Gwenda and father Neil - before going on to play at state level in Australia. She had a life-long appreciation for the personal skills and experiences she gained through the game. While living in Edinburgh, Belinda made a number of trips to Malawi with members of the Watson’s Malawi Partnership (WMP), where she realised the empowering potential of netball in the lives of young women. She was inspired to set up Netball for All - an initiative to support girls and young women through education, by providing them with the skills and confidence gained through sport. The family and WMP hope to continue Belinda's initiative, by raising money to help girls participate in netball. All donations received will go directly towards supporting Netball for All - helping to provide netball kits, equipment and coaching to schools across Malawi.