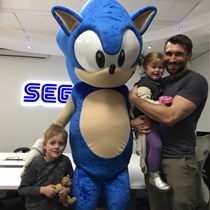 Weʼve raised £4,025 to support Jess, Freya and Jack Davidson. On 15 September 2019 I will be looking to complete Ironman Wales 2019 in memory of Julian Davidson.

Julian passed away suddenly in Edinburgh just before Christmas from an unexpected fatal heart attack, aged only 39. He left behind his loving wife Jess and two amazing young children, Freya (4) and Jack (18 months).

The family was due to return to New Zealand at the beginning of February. Julian finished in his last job in the UK the day before he died, and Jess was a stay at home mum. With no life insurance or Will to support them, Jess, Freya and Jack now face an uncertain financial future.

Julian is someone well known to people at my employer, SEGA. To myself personally, I am honoured to have called him a friend and a mentor; 11+ years ago Julian gave me the opportunity to work at SEGA, he was my manager for a number of years and the main reason behind me picking up running as a hobby. Julian was not only an incredibly kind and honourable, dedicated family man and a true professional, he was also a great athlete with a number of marathons and ultra marathons to his name, with some very competitive times. He took me on my first 10km run at lunch; I was wearing beaten-up Converse shoes and needed a break half way to catch my breath! In 2011, we shared the experience of running the London Marathon - my very first and most painful - and I have never looked back.

I have now been doing marathons for a number of years and have been looking new challenges. With a long distance triathlon called "Ironman" being held in my hometown, Tenby - rural Pembrokeshire, South West Wales - this seemed like the perfect opportunity to try something new...

However, after joining a triathlon club to begin my training, I soon discovered that this is no ordinary triathlon and is known as one of the most gruelling on the whole world Ironman circuit with a tidal sea swim of 3.9 kilometres, an unforgiving and relentlessly hilly bike ride of 180 kilometres and similarly hilly 42km marathon run to finish. All of this is coupled with the unpredictable Pembrokeshire weather, which can offer up strong winds and heavy down pours - and the fact that I have only ever competed in a single Olympic distance triathlon 3 years ago, makes for a challenge unlike anything I have taken up before.

I am some way off Julian's exploits, however I am dedicating my first Ironman event on 15th September to Julian, with the hope of raising some much needed funds for his family.

Upon hearing about Julian's untimely passing and his family situation I felt compelled to do something to help and I was honoured when his family gave me the opportunity to raise money to help support in his memory. I am a dad of 2 young children of a similar age and I cannot begin to imagine how my family would cope if the worst were to happen, so I feel very proud to be going through the biggest endurance challenge of my life with such a good cause behind it.

Please dig deep if you knew Julian and want to support me in what will be a pretty horrific day out of the office! All funds will go towards giving Julian's children a head start in their new life in New Zealand. With each stroke, pedal and step I'll be given extra energy and motivation knowing that I'll not only be doing something I have never done before but I will be doing it raising money in memory of a friend and a mentor.

Thank you so much for reading and for any support you are able to give.