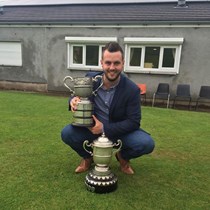 Through late May and early June I will be navigating mainland Europe in a rally like no other in aid of RNLI Penlee (http://www.rnli-penleelifeboat.org.uk/).

This will not be a test of speed or style (thank god), but a test of nerve and self-confidence. As we drift through Belgium, Germany, Switzerland, Italy and France, my team and I will be given a number of challenges – often involving making a mockery of ourselves in public or trying to convince unwitting locals to do the same.

The Monte Carlo or Bust Rally (https://www.bustrallies.com/black-forest-gateau) is specifically designed for those happy to degrade themselves publically and my team and I will be driving our £500 banger through this gruelling challenge in aid of the Penlee Lifeboat association as part of the rally team Starsky and the Hutchinsons. As an extra incentive, if I reach the fundraising target, I will add an extra £250 of my own to the total.

The rally team’s original founder – Dave Greenhaugh - has a deep and personal connection with the Penlee Lifeboat association. His late brother and local publican - Charlie Greenhaugh - was one of the brave crew members of the Solomon Browne lifeboat who lost their lives while trying to save others during the Penlee Lifeboat disaster of (1981). Starsky and the Hutchinsons has been raising money in memory of Dave’s brother for many years and represents a truly worthy cause. The Penlee Lifeboat association continue to operate to this day and need some funds to help establish a new training centre. To find out more about the tragedy have a look at this short video:

Unfortunately, Dave could not make the rally this year at which point I was called up to take his seat along with my good friend Tom Van Mourik. The two of us will be rolling through miles of open road looking for unsuspecting participants in our pursuit of the set challenges.

Arguably, our greatest challenge will come in dealing with our third team member – Mr Michael Levens. For those of you who do not know Mr Levens, I think it is best to picture a rather unkempt and capricious Jack Russell whose unpredictability is only matched by his verve to make any journey as raucous and memorable as possible. Tom and I will likely spend most of our time trying to wake Levens up from deep slumber as we miss yet another junction on our journey (he is the nominated navigator and has insisted on traditional non-electronic navigation – I believe they are called ‘maps’?). As the former Chief Piping Engineer for Schweppes (he proudly informs me he holds a Doctorate in Fizz and Tonic Flow Mechanics!), he is also by far our most qualified technician on the team and will be in charge of all car problems. Like Dr Levens, the chassis of our chosen vehicle would look more at home during the civil war (I’ll let you pick which one) and so things could get tricky along the way.

Wish us luck and please give generously!