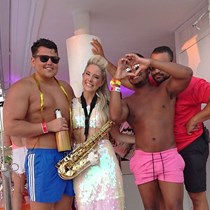 Amy Meskiri was diagnosed with the disease in October 2017 but after undergoing chemotherapy, radiation therapy and hormone therapy, things were looking better. Unfortunately, scans picked up a seemingly harmless nodule on her lung in April last year, along with an undiagnosed problem with her liver in the summer. She fell more ill towards the end of 2018, urgent tests and scans revealed that it was Stage 4 cancer, which had spread to her liver and lungs.

The treatment that she needs can't be provided by the NHS, but a German clinic can offer immunotherapy and targeted therapy to tackle the disease.

Amy's family are looking to raise £100,000 so she can get the trip to Germany and the treatment she deserves. There is a Gofundme page already set up to her her in her cause.

To help raise the funds needed there will be a bike ride which will be taking place on the 31st August.

12 absolute athletes of men will be taking on the challenge of cycling from Bradford to Liverpool, travelling all along the Leeds Liverpool Canal. This is a 120 mile route which we will be covering in just one day! Some may deem it impossible be we are well up for the task.

We would be grateful of all donations to our bike ride and we hope we can go out there, do everyone proud and raise loads of money to get Amy the treatment she deserves.