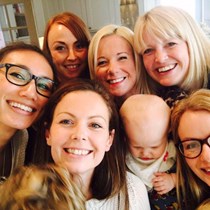 Weʼve raised £0 to Help the family with the extra costs associated with having cancer and to provide funds for them to make memories with their sons.

Our very dear close friend Tim Bilton who is also our son Ted’s godfather has recently been diagnosed with stage four melanoma and is undergoing dual immunotherapy. This is not his first battle with this awful disease. He has been told that the type of cancer he now has is incurable. Tim is 47 years old his two sons are 7 and 13. He has been married to his beautiful wife Adele for 11 years.

Initially, Tim was diagnosed with a rare form of eye cancer just as he was about to open his Fine Dining restaurant. Tim had been on the Great British menu and was on course for his his first Michelin Star. Despite having an operation and radiotherapy Tim continued to work. Providing for his family is what drives Tim. He had one large and two smaller tumours removed as well as undergoing radiotherapy but nothing stopped Tim from cooking.

Tim was then told that the cancer had spread to his saliva glands. He had to undergo a major operation that left him with half the saliva he should have and damage to his tongue. Tim also cruelly lost his sense of Taste which obviously is vital for a chef. This was devastating for Tim. Tim then had to have six weeks of gruelling daily radiotherapy which made Tim so ill and at times he really wanted to stop the treatment but he carried on for his family. During this time Adele worked tirelessly not only looking after their two boys but also ran the family business as well as been a total support for Tim. Eventually it all got too much and after ploughing the whole of their life savings into the business they had to close and concentrate on Tims health and the boys.

After been extremely ill Tim started to slowly regain his strength, and during this time attended the Yorkshire Evening Post Oliver awards where he was presented with the outstanding contribution award by Michael O‘ Hare.

Tim then started to work again and got a job at Cannon Hall Farm which recently has been on the tv series Spring Time on the Farm. Tim loves working at the farm and is back where his passion lies in the kitchen, something he once thought at the peak of his illness that would never happen again. Life was getting back to normal. Then Tim started to suffer from knee pain. After various tests and a painful wait for results it has been confirmed that Tim’s cancer is back and this time in his knee bone. This is devastating for the family who have already been through far too much. Tim now has stage four melanoma and has been told it’s incurable but he has now started dual immunotherapy to try and give him quality of life for as long as possible Tim is dealing with all of this in his usual determined Yorkshire way and those of you who know Tim will appreciate what a truly unique and amazing man he is.

We are hoping to raise money for the family to enable their two sons who are 7 and 13 to continue with as normal life as possible at this difficult time and to ensure they can continue to make memories whilst Tim fights this awful disease. There are so many extra costs associated with cancer treatment and living with the disease and we would really like to try and minimise the impact this will have so that they can concentrate on family time and not have to worry financially.

We are so lucky to have Adele , Tim and their boys in our lives . They are a wonderful family who really do get on with whatever life throws at them in the most inspirational, humorous way and they definitely ‘ keep things real. Please help if you can using the link below.