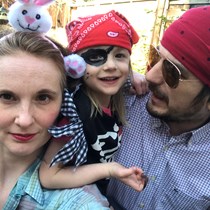 Weʼve raised £1,646 to help fund a headstone and memorial bench in honour of four-year-old Blen

Selamawit and Asres are the loving parents of four-year-old Blen, who very sadly passed away in March 2019. They are in desperate need of your help to meet the costs of a headstone for their beloved daughter, a memorial bench within the children’s area of the cemetery where she has been laid to rest and to cover the outstanding costs of her funeral.

Selamawit and Asres have been hard working members of the community and were blessed with the arrival of their only child Blen in 2014. Since then, they have faced significant financial hardships as a result of a struggle to regularise their stay in the UK. This meant they had to give up their jobs whilst losing all rights to claim any welfare suppport.

In the Autumn of 2018 they were dealt a devasting blow when Blen was diagnosed with Neuroblastoma, a high-risk form of childhood cancer.

In February 2019, there was some justice at last for Selamawit, Asres and Blen, when they were each granted settled status, meaning they no longer had to worry about their right to live and work in the UK. This followed months where they were unable to work, and when Blen’s illness necessitated regular trips back and forth between Bedford and Addenbrooke’s hospital in Cambridge.

With extraordinarily limited income they spent the last months with their beautiful daughter Blen, never leaving her side, and ensuring she didn’t go without.

As in life, so in her passing, Blen’s parents want to give her the best. They wish to commemorate her tragically short but joyful life with a headstone. They also dream of a bench where they and other mourners can sit and remember loved ones who have left us too soon.

I had the great privilege of meeting Blen through my work with the family, and she had a smile that lit up the room. Testimony to the fullness of her short life, during which she touched the lives of so many, there were many mourners saying farewell at her funeral.

She adored Disney and Frozen, and she loved to draw. My colleagues and I have put up her artwork in the office, which acts as a reminder to do all we can to help this warm-hearted and loving family who have met with injustices at every turn.

Blen’s parents are going through the unimaginable. Your support could make sure that money is one less worry for them during this difficult time and give them the peace of mind that they have done everything possible for their beloved daughter.

I met Selamawit, Asres and Blen through my work, and I was greatly touched by the warmth of this family. I want to be able to help Selamawit and Asres at this difficult time.