Will Harney raised £70 from 7 supporters 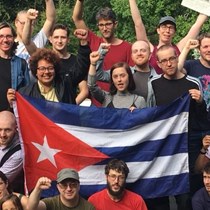 The true revolutionary is guided by great feelings of love. ― Ernesto 'Che' Guevara

UPDATE: On 27 January, a powerful tornado struck the city of Havana. Six people were killed, almost 200 injured and 3,513 homes were damaged. https://www.telesurenglish.net/…/Havana-Struck-by-Devastati…

RATB will be putting a portion of the extra funds we raise for our brigade to Cuba towards helping with the recovery effort. Donate what you can and help Havana rebuild following this disaster.

1 January 2019 marks 60 years of the Cuban revolution, 60 years of socialist construction, 60 years defying imperialism. The Cuban people have withstood invasion, sabotage, terrorism, biological warfare and a sustained economic blockade at the hands of the world’s most powerful economic and military power, the United States. They have given unyielding support to other poor countries. They are building socialist Cuba, a beacon of hope for poor and oppressed people throughout the world. An alternative to poverty, racism and war, Cuba shows that socialism is the only system that can provide for humanity.

Cuba is always grateful for the solidarity of our friends in the world who are many and who, like you, inspired by this example, are slowly breaking the blockade every single day. — Julio Pujol Torres, the Counsellor for Political Affairs at the Cuban Embassy to the UK, at the 2019 Cuba Brigade launch

In 2019, celebrating the 60th anniversary of the triumph of the Cuban revolution, the Revolutionary Communist Group will send our 14th solidarity brigade to the island. Young activists from Britain will spend two weeks visiting schools, hospitals, factories, community centres, farms; learning about Cuban socialism and holding exchanges with Cuban youth about the reality of living under capitalism in Britain, as austerity bites and the war drive continues.

We will also take a donation of musical instruments and sports equipment, a political action to break the continued illegal blockade of Cuba that has deprived the island nation of more than $933bn of development capital over almost six decades. The US blockade reaches its tentacles to try and strangle solidarity work in Britain and beyond, with US companies PayPal and Stripe blocking and confiscating funds from several solidarity groups, including seizing funds raised to send a piano to Cuba. Resisting this extra-territorial assault on solidarity, we are organising fundraising events up and down the country and ask you to support us as generously as you can. The more we raise, the more material aid we can take with us!

On our return we will host meetings, with brigadistas reporting back from their experiences, showing photos and film clips and taking the lessons we can learn from Cuban socialism to the streets of Britain. To host a meeting in your area, please contact us.