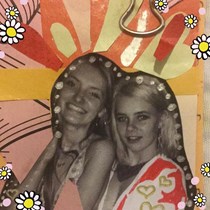 We are first year Film (BA hons) students at Falmouth University. We are crowdfunding to support our film Blue belle, money raised will go towards paying actors, transport, costume and locations.

Blue belle is initially being produced as a film but will also serve as a music video to the song labelled Blue belle. The film will follow a senior re-visiting her younger days while she followed the youth punk culture throughout the 70's, reminiscing through found objects of her past.

As a crew, we are very excited to be producing a film outside of term time, allowing a great range of creative freedom.

We are Falmouth University Film (BA Hons) fundraising for our out-of-term film 'Blue Belle.' Our script was written by our Director from a song she composed, influenced by her readings of Viv Albertine and Joe Strummer. The script is something we have all become excited about.