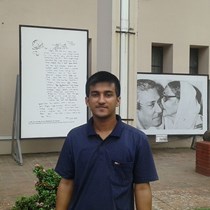 Weʼve raised £0 to I want to go to Europe, I have no money. So please help everyone. Wherever I can read, there is no such money for sending parents.

I want to go to Europe, I have no money. So please help everyone. Wherever I can read, there is no such money for sending parents.I was born in a poor family. I lived in Bangladesh. In 2015, I got Higher Secondary Certificate (H.S.C) Certificate. A few days later, a non-governmental organization was admitted to the degree. When I read classes in class VIII, I started teaching 2-3 students. When classes read in ninth grade, we started teaching some more students. Alongside studies, I learn electrical work, working for some days at other clothes stores. Then I did not want to stop studying. I passed SSC with a little point. Then I admitted the HSC. HSC two years and passed. But I was worried about feeding my mother, my sister, my parents. In 2015, to fill its degree, a non-government organization has been admitted and it is not filled.Postgraduate time, I took some retirement. If the father becomes ill then money becomes necessary. I used to worry a lot for money. One day the sick father scolded me a lot. I did not say anything to my father. I ate all the food at the first time, could send everyone to eat food.and leave the village house on that night and leave for Dhaka in the hope. I was new to Dhaka city. I call my next house a younger brother He used to stay covered for many days. After that, I stayed at night and went out again in the morning. Now I wonder how I will earn money.Then I got a job in a private company. They paid me a lot less. I came to recognize the city of Dhaka. I used to make money but I did not get any chance to study. I want to study now but I can not get money for study. What will i do Playing sick parents or studying myself.I could not understand what to do. I do not have so much money and I do business or earn income at home. One day, an agency broker has signed a contract with the UAE. I went to the UAE to visit the visa. But I returned to Bangladesh two months later.The UAE goes to spend quite a lot of money but it did not go long. Come to the country, more worries, on one hand, on one hand, the father went to waste a little bit of money. I can not get my freedom like walking 😭😭.I have heard that in European countries they can move freely.So I decided to go to one of the European countries. Wherever I can study, parents will send and send money for running. I've already talked to a lot of people who have lived and taken two countries of European countries. The countries are: 1. United Kingdom/London or Canada.I will go to a country near these countries, and then come back to my destination. I do not have the money now, so I can not get a visa to a country.I learned something from Rehaf in Saudi Arabia that you all know. Going to my dream country, I want to start learning again. That was my short life story.I want to reach my goal. I can go to European countries, I want my Freedom. I want to study again in my dream country. Everyone will pray for me. 😍Thank you for Reading😍

Life is short, everyone will die one day.. I want my Freedom. I want to study again in my dream country. I believe you will be with me.Please help