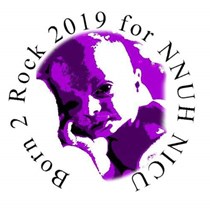 Weʼve raised £100 to help raise funds to give to the NNUH NICU along side our all day fundraising event.

The award-winning Neonatal Intensive Care Unit (NICU) at the Norfolk and Norwich University Hospital is a highly specialist unit looking after the needs of premature and critically ill babies.

The NICU is one of only three specialist neonatal units in the East of England. NNUH NICU is one of the busiest in the region and the staff look after more than 900 babies a year.

after requests to do another and bands wanting to play again and just the pure fun and feeling of doing and fundraising so much for something so dear to our hearts.

Once again we'll be raising money for the NNUH NICU ward and raising awareness of premature and sick babies.

We're also adding a little bit of fun by doing this as FANCY DRESS!!