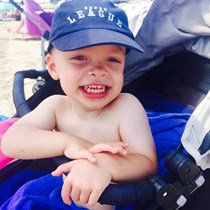 Weʼve raised £310 to fund physio & equipment for Charlie Fielding, a 2 year old boy who was left a paraplegic as a result of a rare spinal cord injury

Our beautiful boy Charlie is 2, he is a smiley cheeky chappy, loveable and determined which is just as well because Charlie faces big challenges and changes for the rest of his life. Charlie, along with his twin sister Poppy were born at 30 weeks and spent much of the first year of his life in and out of hospital with various health issues. Finally at 18 months he appeared to be on the up, spending less time in hospital and was on the verge of learning to walk. This all changed October 17th 2016. Charlie woke that morning in considerable distress, reluctant to crawl or put any weight on his legs. He was taken to hospital where an MRI confirmed the worst and changed our lives forever. Charlie had a swelling on his spine caused by a rare Arteriovenus Malformation (AVM) which had led to his spinal cord becoming damaged resulting in paralysis from the waist down. Charlie was immediately transferred to Great Ormond Street given the rarity of his condition and he remained there for 4 weeks.

Charlies' needs are ongoing, so physiotherapy is one of the key aspects of giving him the best possible chance at a normal life and adapting to his situation. NHS physio has already gone from 3 times a week to once a fortnight and this will then stop altogether. We therefore need to raise funds for further private physio. This will also help his little body have the best chance of any recovery in the future.

Thanks for taking the time to read Charlies story