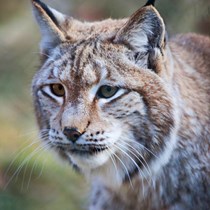 Weʼve raised £40 to help bring the Lynx back to the UK. We've raised £115 so far but have extended the deadline with this new page. Please support us.

The Lynx was known by ancient cultures around the world as the mysterious 'Keeper of Secrets'. Ancient hunters accorded great spiritual significance to lynx and believed that dreaming of them would bring a man magical stealth and hunting powers.  A legendarily elusive creature, it can leap up to seven metres (twenty-three feet) in one bound, before vanishing back into the forest.
And guess what – this magnificent cat used to live here in the UK! Sadly the last of the British lynx disappeared long ago due to habitat destruction and human persecution.
But we can bring them back! Over the past decades, across Europe, there have been remarkably successful reintroductions. The best managed programs have constructed whole new eco-friendly industries around their presence, breathing new economic life into remote rural communities.
Focused on hunting deer species and a variety of smaller mammal prey, the lynx present no threat to humans or livestock. They help control numbers of deer and a variety of agricultural pest species whilst protecting forestry from damage caused by deer overpopulation.
The “Lynx UK Trust" (www.lynxuk.org) is currently working to bring back this beautiful creature. To help their efforts, I’ll be raising funds by attempting the Three Peaks Challenge - climbing the three highest peaks in England, Wales and Scotland all within 24 hours!
Any contribution you can make will be greatly appreciated and perhaps one day we could see Lynx on our magnificent British mountains!

WE DID IT! With less than 3 minutes to spare, we dragged ourselves across the finish line at the bottom of Snowdonia. It was even more challenging than we'd anticipated, always racing against the clock, but we managed to summit each of the UK's highest Peaks!