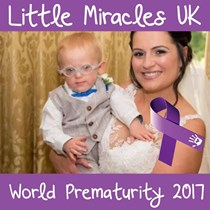 I am trying to raise money for my lovely friend Cerys to be able to bring her little boy home from hospital.

Being a preemie mum, I know how difficult it is to watch your baby fight for their life every day but Cerys and her husband Tom have experienced much, much more.

Please read about their beautiful son Joshua, and lets try to bring him home where he belongs!

This is the journey of Joshua Kent.

At Cerys' 20 week Scan, it was detected Joshua has a very serious congenital heart disease, double outlet of the right ventricle(DORV) VSD, fallows type, after an MRI is was also discovered that Joshua has partial absent corpus callosum.

On the 7th of April, Joshua Thomas Kent was born by an emergency C section, he was resuscitated for 9 mins then rushed to NICU, Joshua then spent the next 7 weeks on NICU, each night his parents (Cerys and Tom) going home to an empty house & empty nursery.

Joshua was then transferred to Birmingham Children's hospital & spent the next 12 weeks there (7 of which in ICU) , during this time Joshua suffered a stroke, which has left him partially sighted, had a heart catheter and also had a tracheotomy to give him a safe airway.

Joshua, Cerys and Tom then made there way back to University Hospital and were told they would soon be going home, this was not the case, over the next four weeks, Joshua's oxygen requirement crept up, until he was on 100% oxygen and they could do no more for him, so yet again Joshua was rushed back to Birmingham Children's hospital, intensive care, where they still remain today.

On the 6th October Joshua had his full heart repair, which was successful but now Joshua has now been diagnosed with broncomalacia, which means he will need long term ventilation (life support).

After a very long, emotional, tiring 9 months, Cerys and Tom have been told they will now have to wait for a care package before being able to take Joshua home (which involves having nurses a couple of nights a week). This can take up to 6 months for funding to be approved by the council which is why I am trying to raise money to speed up the process.

The funding will go towards: A special pushchair, that can hold his ventilator, oxygen, suction machine and a second cot, for the nursery where Nurse’s will stay overnight.