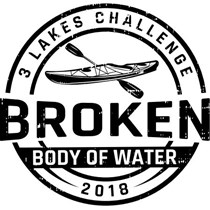 Weʼve raised £3,118 to support the Broken Body Of Water event

Aiming to support Andy Sutton as he embarks on a paraplegic journey to kayak the 3 Lakes Challenge as set by British Canoeing. Becoming the first disabled paddler to have achieved the feat. Raising funds for the Queens Medical Centre Hospital and making a film to capture the challenge, Andy's struggles and the great achievement in the process.

In 2002 Andy was diagnosed with a rare spinal cord tumour, initially treated by surgery and radiotherapy, the tumour which is wrapped around the spinal cord in the lower back is now progressing. Andy initially could walk with a walking stick followed by two sticks. In 2010 following a second round of surgery and radiotherapy, Andy was only able to get around in a wheelchair.

From 2002 until 2010 Andy pursued a busy career in biotech and pharmaceuticals industry, with extensive travelling in the US, Canada and China. and reluctantly retired from his hectic high-profile career

In June 2017, Andy discovered that the tumour was progressing, it is now inoperable because of the highly vascular nature of the tumour, is now resistant to radiotherapy, it will not respond to chemotherapy, and with that comes the prospect of either become quadriplegic or having to sacrifice the lower spinal cord to save upper body function. As a Doctor, Andy has always been all too aware of what his future could look like with no ability to curtail the inevitable.

With this in mind, Andy has set the 3 lakes challenge as his goal before he is unable to paddle which could occur in the coming 18 months given the increased growth rate of his spinal tumour.

The incredible story of Andy Sutton as he embarks on his adventure to try to achieve a feat of endurance kayaking that has never been achieved before.