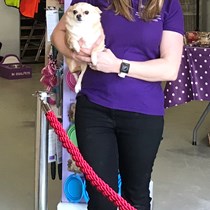 Weʼve raised £2,931 to have a statue of Brutus the Morrisons Cat made in his memory and placed in Morrisons, Saltney where he can still greet his adoring fans.

Saltney, United Kingdom
In memory
Funded on Wednesday, 24th May 2017

Brutus has won the hearts of thousands of local Morrisons shoppers as well as his Facebook followers from all over the world (www.facebook.com/brutusthesaltneycat). He's been visiting the store since it was built in 2010 and became a familiar face to those who regularly shopped in Morrisons, Saltney. He delighted children and adults alike with his cheeky 'cattitude', investigating shopping in people's trolleys as they left the store, jumping into cars to investigate, sneaking down the pet food aisle to see what kind of offers were on, and just generally being there daily for everyone to love and fuss. He had a gorgeous fluffy face and strutted around like he owned the place, oh and he loved the camera!

In October 2013 he was diagnosed with Polycystic Kidney Disease. It's a condition he would have had since birth and sadly there is no cure. We managed this for 3 years with special food, daily medication and regular checks at Ben Jones vets. In January 2016 he became poorly and ended up in Chester Gates veterinary hospital. Luckily he pulled through that time and won their pet of the month award. His condition remained stable for another year however sadly New Years Eve 2016 was the last time Brutus was to visit Morrisons. He took another bad turn and this time, although he had another visit to Chester Gates he didn't recover and on Monday 16th January 2017 we had to make the extremely heartbreaking decision to put him to sleep.

We are devastated, but there are also thousands of devastated fans locally, nationally and internationally! The number of messages I've received have been overwhelming. It makes us happy to know that he brightened so many peoples lives. We thought that a memorial to honour Brutus is only fitting, so that people can still say hello to him and have something to remember him by. Many people have expressed their wish for something to be placed in Morrisons, so this is what we are raising the money for, plus also for local animal charities.