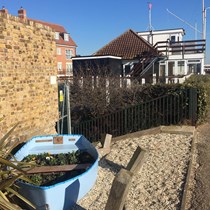 Weʼve raised £1,245 to help Burnham Sailing Club replace it's stolen RIB engine used to teach children between 7-17 how to sail.

The Burnham Sailing Club (BSC) is a small sailing club in Essex and a little over 2 weeks ago the clubs main club RIB engine was stolen from within our club compound. The thieves cut though the fence and removed the engine damaging control and fuel lines. The RIB is insured but due to its age and the increase in insurance premiums if we claim the club will be further out of pocket than we are now!

We are now further securing our compound with additional security lights and fencing upgrades!

To compound this issue our No2 RIB’s engine gearbox was irreversibly damaged last October at the end of the season. The club could have coped with one of our RIBs out of action while we raised money over the summer but now having two RIBs out of action it will be a real struggle to beg/borrow private RIBs to keep sailing going for a long period of time especially with scheduled events and Wednesday evening racing.

The BSC provides sailing for some 80+ children on a Friday night from Easter until the end of September with nominal club fees. We are looking to raise £7000 for a new 50hp engine and £4500 for a new 25hp engine with any leftover going towards the replacing of the compound fencing so this doesn’t happen again.

All donors regardless of their donation will have their names displayed on a plaque in our club and they will also be put into a draw to have a race named after them. Furthermore, any donors pledging £100 or more will be invited to a Commodore’s reception during the last week in August 2019.

The Burnham Sailing Club (BSC) is a small sailing club in Essex situated on the river Crouch. We teach children how to sail between the ages of 7 and 17.