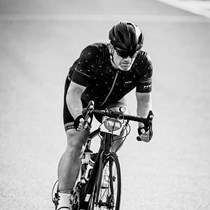 SO my target for 2019 has had to be moved back to 2020,just due to the difficulties raising the required logistics costs. But that doesn't mean I am relaxing!! In its place on 27th June 2019 I will set off on a route of 650 miles, the equivilant of climbing Everset and passing through all teh RAF stations I served at in my career as well as a special stop at Scottys HQ in Kings Lynn the schedule is tough and I am hoping to pick up some riders for parts of each leg 9If you fancy a ride let me know!) :

Why I do this?

I have been putting myself through the mill for Scottys Little Soldiers since 2013. I've played rugby for over 25hrs, walked 150 miles, ridden countless miles on my bike, but now I am about to take on the toughest , most extreme challenge yet In June 2019, 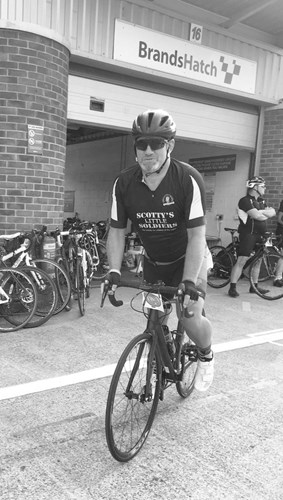 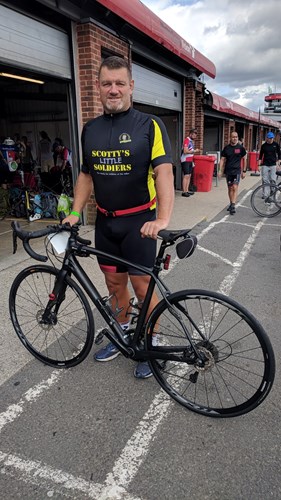 The charity I am doing this for is www.scottyslittlesoldiers.co.uk set up in memory of Corporal Lee Scott, who was tragically killed in 2009 whilst deployed to Afghanistan. His widow Nikki , mum of Brooke and Kai, set up the Scottys Little Soldiers charity to support and put a smile on the face of the children left behind when a parent is killed in service of their country. Race coincides with the 10 year anniversary of Scottys I felt compelled to make sure this anniversary gets the greatest level of commitment I could give.

I will be aiming to complete the toughest bike race in Europe as a solo rider- The Race Across Europe, 3000 miles over 7 countries, with climbing of over 170000ft. The Race Across Europe sets off from Calais in June 2020. My aim is to win the race! I will need to complete 250 mile day, go over the Alps twice, the Pyrenees once, it will be the ultimate mental and physical challenge.

I am new to cycling, not a lifelong cyclist, just an ordinary bloke trying to achieve something amazing. Having only taking up the pursuit in 2017 after the demands of his previous sporting career and military service took their toll on the body. Cycling presents a new challenge, but one that I have embraced and in a short space of time, so far made rapid progress. In September 2018, I qualified for the Race Across America by completing 355 miles in 24 hours. The cost of the RAAM is very high so in its place I want to go to the next level in the ultimate European bike race challenge, logistic costs are more realistic and the distance the same! in the process highlighting the Scottys cause and to give the children much needed support. Letting them know they are not forgotten.

I will be covering 250 miles a day with a goal to complete it in 12 days and will need a 6 man support crew, which will include mechanic/masseur/chef. The total cost for the support and event costs are an £8000 budget. I need companies and individuals to help achieve this goal and to raise further funds for this fantastic charity.

We will need to raise the funding to cover:

Examples of which are:

If you can help, or know someone who can please contact me on 07951477149 or dominic@infpromax.com 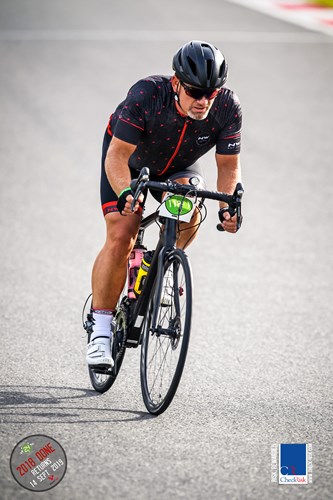 I am just a normal bloke, not a full time athlete. I have to balance work, life like everyone else. I always give 100% I don't know what I am capable of until I am faced with it! "I can handle failure, what I can;t handle is not trying!"