Weʼve raised £6,500 to support charities set up by some of the families who lost loved-ones in the 2017 Manchester Arena attack.

The Mayor of Greater Manchester, Andy Burnham, is set to pound the pavements of Boston on 15 April, running the marathon to raise funds for charities set up by some of the families who lost loved-ones in the 2017 Manchester Arena attack.

Boston is the oldest annual marathon in the world and takes place each year on the third Monday of April, Patriots’ Day in the United States. It was the target of a terrorist attack in 2013 when three spectators were killed and an estimated 264 were injured.

The Mayor has been invited to run by One World Strong Foundation, an organisation founded by survivors of the Boston bombings which brings together victims of terrorism around the world. They came to Manchester on the one year anniversary of the Manchester attack.

Andy will dedicate his second-ever marathon to all the families who lost loved ones and will raise money for a number of charities and causes set up or nominated by them.

Andy said: “I know this is a very difficult time for all the families as we approach the second anniversary and, in a small way, I just wanted to let them know we are thinking about them. Greater Manchester will always be there for them.

Many of the families affected have set up charities in memory of their loved ones and are doing amazing work in their communities to bring people together and give them hope. It is a great honour for me to run this prestigious Marathon for them and I will be doing my best to raise funds for their important work.

I would also like to thank the One World Strong for coming to Manchester to support people here and for extending this invitation to me. They are an inspirational organisation working across the world to unite victims of terrorism and build a network of cities standing up against hate of all kinds.

“I’ve done one marathon before and can say without hesitation that this will definitely be my last. If I have a target, it is to beat my last time of 4 hours 28 minutes. But, really, I just want to finish and show how Manchester stands with Boston, Christchurch, Pittsburgh and all the cities around the world which have suffered from appalling acts of hate in recent years. The only way to beat this evil is come together around the world in celebration of our equality, diversity and common humanity.”

The charities the Mayor will raise funds for are:

Andy will also raise funds for a charity that is being established by Andrew Roussos, the father of Saffie-Rose, which will help UK victims of terror. Other families have special projects close to their hearts and the Mayor will be discussing an appropriate dispersal of funds raised. 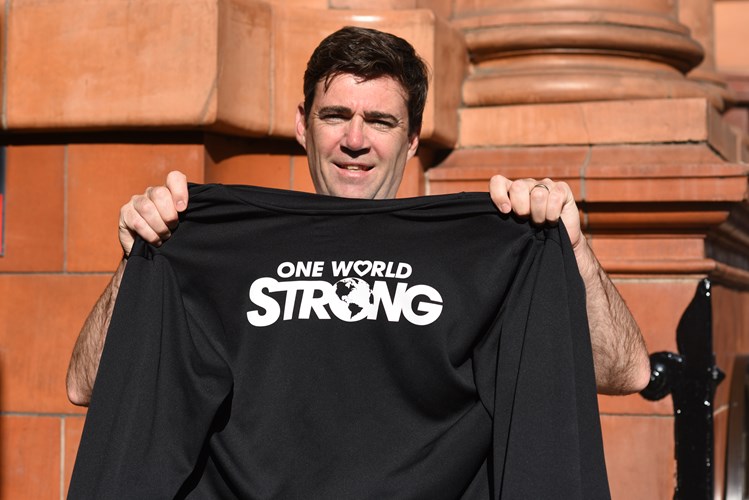 One World Strong Foundation is a growing international community of survivors and first responders who are living with serious injury and psychological trauma. The invitation to participate in the Boston Marathon was extended by One World Strong representative Dave Fortier on a visit to the Manchester Marathon last year.

Dave from One World Strong said: “We were initially connected with Manchester through an exchange developed by the US Embassy in London aimed at supporting our two countries shared security priorities — to prevent terrorism, assist community recovery following the traumatic experience of a terror attack, and build resilience to all forms of extremism.

But now, Boston and Manchester survivors are bringing our two countries even closer as partners engaging around the globe to support survivors and families worldwide who are recovering from terrorism and trauma. Running the Boston Marathon alongside Andy — in support of British, American, and international charities — is a beautiful expression of that partnership.”

Funds raised will be shared equally between charities and causes either set up or nominated by the families of some of those affected by the Manchester Arena bombing.

Jayne Jones, whose daughter Nell lost her life at Manchester Arena, has since set up the Remembering Nell Foundation and has lent her backing to the Mayor’s efforts: “Completing a marathon is no mean feat and we wish you every success,” she said.

It may not seem like it at this point, but the sense of achievement at the end and knowing the reason you took part, will very much make all of the hard work worthwhile.”