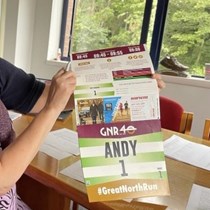 Weʼve raised £275 to support charities set up by some of the families who lost loved-ones in the 2017 Manchester Arena attack.

The Mayor of Greater Manchester, Andy Burnham, is set to hit the streets of the city-region this weekend, raising money for charities set up by some of the families who lost loved-ones in the 2017 Manchester Arena attack.

Any monies raised will top up the £6,500 already secured after the Mayor completed the recent Boston Marathon.

Andy will tackle the 10km course at the prestigious Simplyhealth Great Manchester Run on Sunday 19 May on a route starting and ending in the city centre and passing by several major landmarks including Manchester United’s stadium at roughly the halfway point.

At this year’s Great Manchester Run, participants will be supported every step of the way by onlookers and well-wishers and will be able to enjoy vocal backing from a host of local DJs, live bands, choirs and drummers.

There is a week until the second anniversary of the Arena attack, which took place at the conclusion of an Ariana Grande concert on 22 May 2017. At 10.31pm on the evening of the 22nd bells will ring out for one minute from Manchester Town Hall, Manchester Cathedral, The Hidden Gem Church and St Ann’s Church.

Andy said: “I know this is a very difficult time for all the families as we approach the second anniversary and, in a small way, I just wanted to let them know we are thinking about them. Greater Manchester will always be there for them.

“Many of the families affected have set up charities in memory of their loved ones and are doing amazing work in their communities to bring people together and give them hope. I am looking forward to running this 10km for them and I will be doing my best to raise funds for their important work.

“Sport has the capacity to bring people together in a shared communal experience – there’s almost nothing else like it. The Great Manchester Run will be a great event and Greater Manchester will come together to show that the only way to beat the evil in this world is to celebrate our equality, diversity and common humanity.”

The Great Manchester Run is the Mayor’s third fundraising undertaking in recent weeks, having tackled a half-marathon at the Greater Manchester Marathon before completing the full marathon in Boston a month ago.

Generous donations flooded in ahead of Boston, and in total Andy raised around £6,500 for a host of worthy causes. As with Boston, on this occasion the Mayor will be fundraising for:

Other families have special projects close to their hearts and the Mayor will be discussing an appropriate dispersal of funds raised.