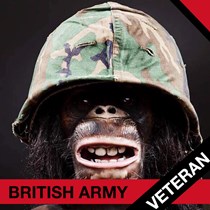 The Borough of Bury Veterans Association will be putting in a team made up of Veterans from all three services and civilian dependants to run the Bury 10km in order to raise money for Bury Veterans Hub.

The Veterans hub was set up at the start of this year to provide several services for Veterans and is based in the Mosses Community centre situated near Bury Market. The Veterans hub provides a means for support and welfare, this can range from a simple drop in for a chat to been signposted to several organisations for mental health and well been, it also provides a central point for Veterans to gather in the form of a breakfast club, through the veterans hub in this means quite often veterans can get a sense of belonging and this also combats social isolation, along with a English breakfast, brew and also inter service banter.

Veterans have experienced and witnessed the horrors of war and this has had a life changing effect on us. But what happens once the guns fall silent and we have come home, what happens once the parade has ended, and we have discharged from the services, what happens once we have de-kitted and handed in our ID cards and have left barracks for the final time into civilian world. Some Veterans have difficulty settling into civilian life, we feel out of place and unable to communicate with the outside world, then PTSD starts to kick in, the horrors of war start to return, experience flashbacks, reliving life or death situations over and over again, imagine being scared to go to sleep, waking up screaming, fighting and covered in sweat, some veterans sink into depression, they become socially isolated because they don’t want to face the outside world, some veterans turn to alcohol and substance abuse to cope, some veterans self-harm, unable to hold down a relationship or employment then some veterans contemplate suicide as a means to end it all.

The Veterans Hub helps a troubled Veterans to combat those demons and settle into civilian life by providing a stable environment often with other Veterans who have been through the same journey, in the services we look on each other as family, would you trust your life to a complete stranger or a member of your family, the Veterans hub can often prevent a Veteran from falling into the system and becoming another statistic on all ready over stretched resources of the NHS, police and prison system, it could save a Veterans life by pulling them back from the edge.

The Veterans Hub is there to support all Veterans from all services as well as dependants by providing a stable setting and environment and able to signpost Veterans to vital services and also assist the veterans in mental health and welfare.