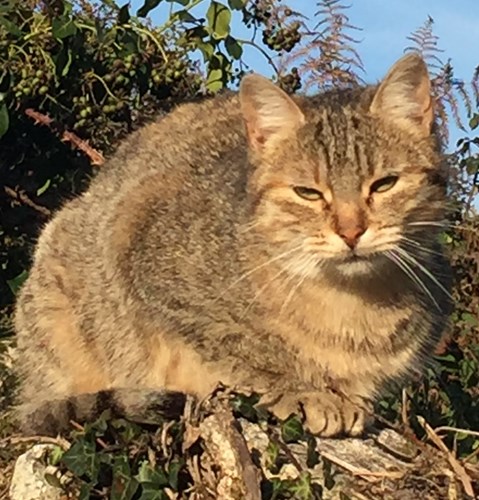 If Jessie could talk she would say:

thank you humans for helping me have a long life where I just have to look after myself. There are enough unwanted kittens in the world!

Both photos are of Jessie. She was neutered around four years ago and she's now a healthy adult cat who hasn't had to go through lots of pregnancies. She is one of around thirty cats we have trapped and taken to the local vet for neutering.

We first came to the village in 2007 and we soon noticed that there were lots of feral cats, and they were all hungry! We started feeding them and the more we fed them the more cats arrived. Then a vet friend in London suggested we do some neutering and so our adventure in TNR (trap, neuter, and return) began.

We look after a steady population of around 15 cats (that's plus our pets). We feed them and we get them treated when they're ill. Although they're a hardy bunch we have to contend with the odd bout of cat flu (a killer when you're not vaccinated) and injuries.

Recently there has been an influx of un-neutered cats and we need help to get them neutered. We think there are about 10 and most are females, meaning a population explosion in imminent.

We have the traps and some time to do it, but we need some support so we can pay the vet. He is very kind and gives us a discount but it is still an expensive undertaking.

You can read more about our work here

The Butterfly Cat and her friends started in 2011 as a small charity supporting a colony of feral cats in a village in rural Galicia. You can see the work we do on the website butterflycat.org Now there´s about to be a population explosion and we need your help.