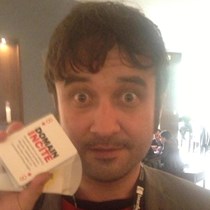 Christopher Ambler is an acknowledged internet pioneer who in 1996 first introduced the generic top-level domain ".web" to the internet.

Sadly, like Leonardo's rudimentary notions of human flight, like Babbage's Difference Engine, like Vanilla Ice's foray into white rap, Ambler's .web was an idea of earth-shattering genius that came tragically before its time.

Nobody wanted to buy .web names. Nobody could even use them.

But the genius of the idea was there!

Twenty years and a lawsuit or two later, evil internet overlord ICANN has now sold off .web to goodness knows who -- likely a bunch of opportunistic ne'er-do-wells -- for the kingly sum of $135 MEEEEELLION DOLLARS.

And our young Chris, sadly, will not see a penny of the proceeds.

He's a true internet hero who has been royally screwed by The Man, so let's all buy Chris a pint to cheer him up!

The suggested donation is $10 (USD) which I reckon is probably what a pint of foaming, nut-brown ale costs nowadays in Ambler's increasingly gentrified Northern California home-town.

Our target is 500 pints, which should keep him in blissful, belching carefreeness until whoever bought .web files Chapter 11 and he can return to peace, safe in the knowledge that it wasn't such a great idea after all.