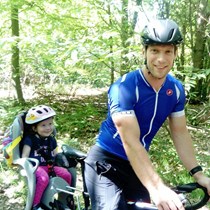 Myself and Stu Nutting are going to ride the Coast 2 Coast route from Whitehaven to Sunderland in one day. It is 129 miles and contains approximately 11,500ft of climbing

We are aiming to raise money for Leeds Children's Hospital Ward 52 and Motor Neurone Disease Association.

My daughter, Hollie, has recently been, and still is under the care of Leeds Children's Hospital. At 14 months of age she had major reconstructive skull surgery to reconstruct a suture that had fused early. Fortunately she is recovering well and improving day by day.

Leeds Children's Hospital have been fantastic in the care they have offered. They are one of only 6 Hospitals that offer this surgery in the UK and they cover all of the Yorkshire area.

Motor Neurone Disease Association have given help and support to Tommo and his family since Lisa's diagnosis. We would like to help the charity continue their work with Tommo and other families that are effected by this cruel disease.

All money raised will be split 50/50 between Leeds Children's Hospital Ward 52 and Motor Neurone Disease Association.

Thank you for taking the time to read.