Callum Foy is a caring, happy 10 year boy from Warrington who loves to spend time with his two younger brothers. He has a love for rock music and Manchester City FC.

Callum suffers from a condition called Neurofibromatosis which can cause tumors to form anywhere on the body. Most of the time these tumors are benign, but unfortunately for Callum he developed a large plexiform in his neck which turned malignant.

In July this year the plexiform in his neck started to grow rapidly, so surgeons decided to remove as much as they could of it. They were unable to remove everything due to it being in a delicate area. His family then received the devastating news a week later that it was cancer, a grade 3 nerve sheath sarcoma. High dose chemotherapy started two days later and Callum is currently in Manchester Childrens Hospital about to start his second round of treatment. Callum is also due to start proton beam therapy in the next few weeks. On top of this Callum also has an inoperable brain tumor also caused by the Neurofibromatosis. Although there are no signs of this being malignant, it is showing signs of activity meaning it will require a different form of chemotherapy at a later date.

Callum will have to travel have to Germany on the 3rd September for Proton Beam Therapy. This will be for 8-10 weeks of daily treatment. Whilst this treatment will be funded by the NHS, Sophie and Gaz will need to fund the cost of taking their two younger children with them as its unfair to separate the family for such a long period of time. They will need to cover the cost of five passports, flights and their living expenses abroad whilst still paying the bills back at home.

Gaz, Sophie and their 3 sons Callum, Riley and Macauley are one of the nicest families I have ever met. They are always helping other people but this time they are the ones needing our help. Callum is in and out of hospital so much recently that his dad has had to take time off work to stay with Callum whilst his mum looks after his two younger brothers. On top of this his dad is due to made redundant in the next couple of months.

This is a really tough time for them all, not just emotionally but financially too. This is going to be a long fight and I am hoping to raise as much money as I can to ease the pressure of any money worries so they can concentrate on getting Callum better. Money raised will help towards the cost of traveling back and to for appointments and treatments and also towards the cost of living in the hospital during long hospital stays. It will also help with anything that Callum may need along the way including supplements to support his dietary needs.

Any help through fundraising or donations no matter how small will be greatly appreciated. Thank you xx 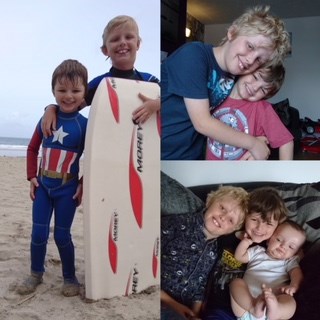