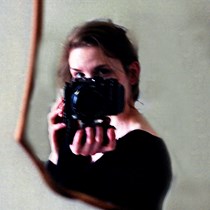 I started photographing London after the EU referendum as a possible farewell, either to London itself or to a period in my life and in history that I woke up to appreciate too late. I have lived in London for over 10 years but never felt I belonged here. During the referendum campaigns I was very moved by the concern of my British friends and acquintances about my fate should Brexit happen. I had considered myself as a guest in this country and although I had regognised that I have legal rights just like everyone else I thought, due to my previous experiences, that I was just tolerated here. Seeing that this was not so changed me in many ways.

Later on strolling around London in the early hours of the day taking photographs with my Rolleiflex camera evolved into a project called London Archive. My aim is still the same, to hold onto the city somehow, but also to present the city’s characteristic but often unnoticed features; its constant re-construction, historical wealth and diversity. Photographs themselves are never enough but we have to be guided to see. I have been mulling over an essay on questions of identity and origin as something fluid, something that London as a city demonstrates too. My plan was to stop taking photographs for London Archive on the 29th March 2019 when UK is due to leave EU and then focus on getting the series exhibited.

I am in the process of applying of for funding for this project from bigger organisations but as it often is in (my) life I am simultaneously running out of money and time. 29th March is less than 6 months away and decicions for funding applications can take up to 2 months. I am therefore raising money on JustGiving for the material costs as well as getting the films processed to keep this project going until I get a decicion from the Arts Council and other organisations - or until the 29th of March 2019. I have shot ten rolls of film that I need to get processed and would like to purchase, photograph and process 20 more rolls of slide film.

I will be grateful of any help! If and when this project will be exhibited I will be inviting everyone who donated to the private view.

I am a Finnish photographer, now strolling in London.