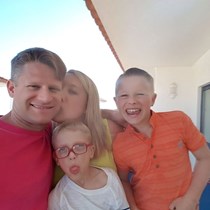 Fraser was born at 27 weeks weighing 660grams with a 70% survival of the birth. We had a roller coaster journey in SCBU, close a few times to losing him. Fraser was (and still is) a fighter and made it home 3 day's after his due date october 2010. Hospital soon became our second home as Fraser was poorly throughout the winter with broncholitis and pneumonia. Fraser had a feeding tube fitted as he hadn't gained weight for a whole year.
An MRI scan showed he had calcification on his brain, unfortunately no-one knows if he was born with it or if it just developed. As Fraser grew we soon realised he wasn't hitting his age appropriate milestones, his mobility and communication are just some of the things affected. In the past 9 months the calcification has worsened causing Fraser to deteriorate. On top of all of this Fraser has liver disease which was caused by prematurity being on TPM longer than he should of because his stomach didn't tolerate milk. His liver has caused his spleen to enlarge and low platelets. Fraser will now need platelet transfusion on a regular basis. Unfortunately, this has recently caused varices of the oseophagus which have been banded and injected, they are currently a grade 3 and he has to go every 4-6 weeks for a scope to check and prevent a big bleed.
In SCBU Fraser had ROP disease due to having lots of oxygen and ventilation. He had to have lazer treatment which unfortunately didn't work. This means he is now blind in his left eye. Two years ago he also had a heamridge in his left eye and needed another operation. This did work however, it needs to be redone as he now has a cataract.
The future for Fraser holds a lot more appointments, tests and treatments. Within the next month he has got to have his bone marrow tested and skin biopsys taken along with a load more blood as they are desperately trying to find a dignosis.
Fraser has always been known for being happy smiley and cheeky unfortunately since his deterioration he is becoming less happy and smiley and more anxious and grumpy. Fraser would always be charging around, playing with his brother and causing mischief! But he is struggling to walk these days.
While Fraser has been spending alot of time in different hospitals recently, he has been enjoying the sensory rooms. They have given him his little smile back and been a really positive part of his journey.
Due to this, Stuart (Dad) and I (Mum) would like to recreate a sensory room within our home for Fraser to access.
Some of you may know the cost of this equipment, it certainly isn’t cheap.
Stuart, Stuie, Fraser and I are asking for a donation of any size to make this wish come true.
Thank you in advance