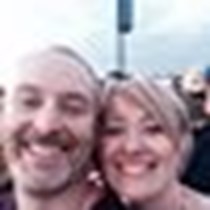 I'm running my first half marathon in Southampton on Sunday 23rd April 2017 and fundraising for Ryde Rowing Club's new boat .
The positive impact of rowing changes lives, and our family has benefited so much from Ryde Rowing Club over the last 7 years that I'm hoping my personal challenge to run 13 miles (!) will contribute in some small way towards them achieving their fundraising goal.

Ryde Rowing Club are currently raising funds to purchase a new Coxed Coastal Four which will cost the club around £12,000 of which just over half has been raised to date. To remain competitive against Island and Mainland opposition it is critical that the latest design of coastal four is acquired - the newly designed "Wessex" Coastal Four, designed and built by Design Craft of Southampton being the target.

The provision of this new boat will also increase the current capacity, allowing us to get more members afloat and will have a cascade effect freeing-up existing equipment to other groups and will extend access and participation, expand the range of skills we can teach and the events we can participate in.

Ryde Rowing Club are a Community Association Sports Club (CASC) run by volunteers, with no paid staff or coaches. They are affiliated to British Rowing, the Wessex Regional Rowing Council and the Hants & Dorset Amateur Rowing Association - and have Clubmark Accreditation and are authorised by British Rowing to run the National Junior Rowing Program.