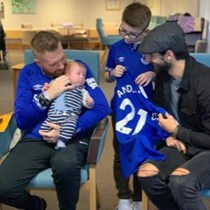 Weʼve raised £16,549 to be donated to Ashley's two boys and shared equally to support them with their future 💙

Help us support Ashley's boys - Any money raised will be split between Ashley's two beloved boys to support them in their future.

So, here's the thing, I've been trying to put pen to paper for weeks, to put the heartbreak into words, to put the words into sentences, and for the sentences to explain what this page is for. But the truth is, the heartbreak is so crippling that the words don't form, the sentences don't make any sense, and therefore the page does not exist. However, I know that many of you have expressed that you would like to help, and I'm also painfully aware that Ashley would have had this up weeks ago if the tables were reversed, so even if I can't do the words justice, I've got to put them out there anyway.

As many of you already know, Ashley and I have recently celebrated the birth of our son , as many of you also know, like some cruel cosmic joke, Ashley was diagnosed with stage 4 pancreatic cancer and Liver Metastes and sadly passed away on March the 7th after a short but extremely brave fight against this awful disease. He was stoic and strong throughout and didn't lose his sense of humour - The support he received was nothing short of incredible and a testament to his wonderful and kind character. He was humbled and moved by the love he received from not only from his family and friends but strangers from far and wide.

It is absolutely unimaginable to me that Ashley will not be able to see our little boy grow and to shape him into the man we'd both like him to be, my hope at least being for a man just like his father.

A man who's heart and career as a builder has involved many sefless projects, one to name a few was that of a televised pro-bono for a very poorly child who was able to enjoy a beautiful purpose built home. He will always pay things forward by providing local and trusted names of friends and businesses. He’s the man with a smile, a funny story to embarrass each and every one of his friends and family and a heartfelt consideration for all he meets. Not only for the elderly, but for his friends, family, his children, his beloved Everton and finally for me.

This is for the builder with a heart, who always heads to work early and finishes late, all the while thinking that he just had more time.

Who would never miss the annual Barry Island school trip with his beloved and utterly devoted 8yr old Son, that over-the-top protective Uncle encouraging his nieces and nephews from the side-lines at their weekend football matches. The man with the van, the protective son, the man that would never see a child or elderly person in dire straits and the man that would always take on young apprentices regardless of previous misfortunes.

A man that will make you laugh, make you cry, make you smile, make you recommend him to your Grandma and then make you want to have him raise your children .

He was a selfless, beautiful human-being who loved all of his family and his friends with his every bone in his body, his wish was for the fundraising events to continue to support his boys future.

Those are all the words that I have for now, I hope I've done him justice.

From our family to yours, thank you for reading and for any donations that you might be able to spare. All of our love.

This is for the boys of a builder with a heart, who always headed to work early and finished late, all the while thinking that he just had more time. He would will make you laugh, make you cry, a selfless, beautiful human-being who loved his family with everything he had.