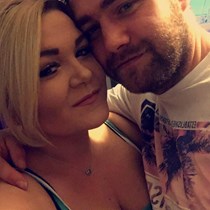 myself and tom have been married since september 2016

we stopped trying and just let nature take its cause..

in october 2017 i fount out i was pregnant again.. we had such a strong feeling everything would be ok this time we started to get excited and actually believe after all the heart break we was finally having our own baby!

The hospital wanted to keep a close eye on me due to my history to then only to be told the most hesrt breaking world shattering news that it was another ectopic pregnancy and that im going to loose my left tube and that after my operation i would never be able to have a child natually and that our only option is to to ivf...

fast forward to now.. and there is nothing more we both want than to have our rainbow baby.. but the only thing getting in our way is the money as we have to go private..

our goal for this time next year hopefully we will finally be pregnant & finally get our light at the end of a tunnel..

after every storm comes a rainbow 🙌🏻