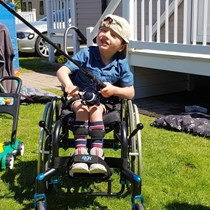 At the 12 week scan, it was found that our baby had a condition called Gastroschisis. However, though this was a very uncommon condition we decided to continue with the pregnancy as we had been advised that after surgery when born, the baby would have a normal life.

He suffered with milk intolerance and could not accept milk of any kind. His TPN long line that was feeding him with the nutrients that he needed then became infected with two different bacteria's which lead to sepsis.

Logan's life was now in danger! But, being Logan, he battled on after having the long line removed and later re-positioned.

He battled through many other minor set backs, he finally came home on 24.07.2017, returning to the hospital on a weekly basis.

Logan then continued to progress at home, however he was not reaching the "normal" childhood milestones.

On 22.10.2018 Logan was seen by the physiotherapist team at home, they assessed his condition. We then attended an appointment at the hospital with the "premie" consultant where it was confirmed that Logan had a type of Cerebral Palsy(CP).

We then attended CP clinic on 28.02.2019 where they carried out further testing where his Gross Motor Function Classification Score was confirmed to be at level 4, on a scale of 1-5, with 5 being the most severe.

Meaning that Logan was / is reliant on others and a wheel chair for mobility.

Medication was then prescribed to try and relieve some of his discomfort.

In May 2019 he was sent for a MRI scan which revealed that he had Bilateral PVL (Periventricular Leukomalacia), which is the softening of white brain tissue near the ventricles (fluid chambers to the brain). This caused Logan to be diagnosed with Bilatral C.P. effecting all four of his limbs. Resulting in pain and discomfort daily with him unable to sit, stand or walk unaided.

Logan has had intensive physio and hydro therapy since 2019.

He has been supplied with a support walker and wheelchair to encourage and help him with is mobility. He has also received special chairs and tables supplied to the Nursery he attends and also in his home to make his life easier.

In December 2020 he was finally able to go back into the hospital (due to Covid 19) and start the next stage of his treatment and have Botulinau Toxin A injections into his Bilatral Adducttor Longus and Gracilis (muscles), this gave him more movement in his upper legs reducing the spasticity helping with the scissor action in his legs.

Due to Logan's determination to walk and the hard work and encouragement everyone involved has given to him, Logan has now been put forward for an SDR operation - Selective Dorsal Rhizotomy at Alder Hey Children's Hospital in Liverpool.

This operation will reduce the discomfort Logan suffers everyday and gain more independence, with an insight into him walking unaided in the future.

So after we were given the wonderful news that specialists feel that Logan would majorly benefit from SDR, we were then told that unfortunately the NHS would not be able to fund the expense of the operation nor the intense physio, that will be required post operation.

This is the bit where we ask you to help us give Logan his dream to be pain free and drug free, to give him the greatest opportunity to walk, run and all the other things that all boys dream of doing.

We need to raise roughly £60k plus to start this process.

We will be doing MANY fund raising activities and hope that you can all come and join us, but if you feel you would just like to donate anonymously or would like to help by organising an event then please feel to contact us.

Logan Thanks You all for taking the time to read his story so far and hopes that he can continue his journey with your love and support from near and afar.