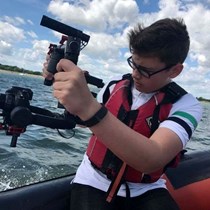 Weʼve raised £570 to The Offshoot Foundation and EEAST by doing 2 bike rides and a skydive!

Over the next four months, Leighann, Justin and James will be taking part in two different events (or three for Leighann!). These events are to raise money for two different charities which have both touched our hearts, not only for the last few months, but years. These charities are ‘The Offshoot Foundation’ and ‘The East of England Ambulance Service Trust’. All funds raised will be split equally 50/50 between them.

The first event commences on the night of the 13th of July, when we will be participating in the ‘Dunwich Dynamo’ bike ride. This is a bike ride from the centre of London to Dunwich on the Suffolk coast. This is around 113 miles and is done over the night of Saturday the 13th into Sunday the 14th of July.

Leighann (and Leighann only!) will be completing the second event which will see her brave a skydive in the summer. Due to the weather we cannot set a specific date yet, but as soon as we know, you will too!

Then finally, on the 15th of September, the three of us will be taking part in the ‘London to Brighton Bike Challenge’. Starting in London, we cycle just over 50 miles south up and over some painful hills into Brighton.

We will be going live on Facebook throughout all three events, so make sure to keep an eye out and watch!

Please give generously for the two charities we are supporting over the next few months and keep checking for updates on the training!

Here is a quick bit about each charity, and how it has affected us in the past:

The Offshoot Foundation is a registered charity, based in Suffolk, delivering film education and training to disadvantaged and young people across the UK. They are committed to safeguarding and promoting the welfare of children and young people.

The Offshoot Foundation aims to empower, enthuse and inspire disadvantaged people, to develop life skills and raise aspirations by using creative media to reach their full potential. They have been running workshops since 2008, which have helped young people develop their confidence, leadership and teamwork skills through film-making and creative media.

Starting in 2012 at the ‘Summer Film School’ in Sudbury, I was a quiet, shy and reserved person. I can still remember the whole week in my head like it was yesterday. I arrived on the Monday morning, scared I wouldn’t know anyone, or they’d all be horrible. I had a million different ideas going through my head about what may happen, none of which were true.

The Monday, as we say in all workshops, is the hardest day. We started by everyone introducing themselves and the helpers told us about them and what they do. We played a few games to help us all open up a little and prepare for the coming days. Me, being the shy year 4 student, took part but wasn’t quite as ‘extravagant’ as I am now! We soon split into our groups and were assigned a leader, mine was Dan Newman.

Over the next 4 days, we wrote a script, filmed, did voiceovers and edited our ten-minute film: ‘Lord of the Remote’, still one of my favourites! During that week, for my camerawork and always saying “I can film that if you want?!” I won an Oscar; which is still a prized possession of mine.

Over the last 7 years, I have taken part in countless film, television and music video workshops and, for the last four/five years, I have helped or lead groups. Since January I have become a trustee of the charity.

With the help of The Offshoot Foundation, I have become a proactive, dedicated and resilient young adult. They have helped me find who I want to be when I grow up, even though it isn’t in the film and television sector. Without the help of The Offshoot Foundation, I wouldn’t have been part of a group to win a Live Well Suffolk Oscar in 2014, nor would I have been a runner up in the Sudbury Hive Volunteering Awards 2019 in the Young Volunteer category.

If I hadn’t had been part of The Offshoot Foundation, I would not have had the myriad of opportunities to flourish into the young adult I am today. The money you donate will give an endless amount of opportunities to young people to develop and grow into independent adults.

EEAST provide 24 hour, 365 days a year accident and emergency services to those in need of emergency medical treatment and transport in; Bedfordshire, Hertfordshire, Essex, Norfolk, Suffolk and Cambridgeshire. They also provide non-emergency patient transport services for patients needing non-emergency transport to and from hospital, treatment centres and other similar facilities. This service is specifically designed to support those who can’t travel unaided because of their medical condition or frailty.

I’m a new cyclist and anyone who has me on Facebook or Strava already knows this! Recently, I’ve started to cycle on the road more, training for the cycling events happening later on this year.

On the 30th of April of this year, my partner Justin and I were out cycling in Colchester. We had cycled about 2 miles when a car over took too close to me, resulting in me hitting the curb. I went over the handle bars and landed on my forehead and my bike fell into the road. Justin, cycling behind me, saw the whole event. He immediately stopped, pulled the bike to the side of the road and ran over to me. Instantly, he knew I was in serious danger from the amount of blood already on the road and path.

The car had sped off, but thankfully another car had stopped, as well as one other cyclist. We called for an ambulance, which luckily enough had just come onto shift so were only 4 minutes away.

We went through a whole box of tissues trying to suppress the bleeding from the cut an inch wide on my forehead, millimetres from my eye. I later found out that, if I hadn’t have worn my helmet, my injuries would have been life-threatening.

When the paramedics arrived, they were successful in stopping the bleed on my head. But, in the ambulance, there were many things that were not working or not working as efficiently as they should have been. Unfortunately, this is not the case for just this one ambulance, but for lots.

The heart monitor wasn’t working properly, nor was the blood pressure gauge. I was surprised to see that our first responders were not kitted out with the best equipment, especially when these people are the first on the scene of any accident. I was lucky enough not to be in a life-threatening situation, but many others are. This is why they need your help.

Any money raised will go towards getting better equipment for the first responders, in the hope that lack of, or poorly working medical facilities, do not cost the life of someone who is injured in an accident like mine. Your money is needed to make sure every ambulance is ready for action.