Charlie is a very special little boy whose life changed forever at only 3 weeks old when he developed septicaemia and meningitis caused by Strep B. Against all the odds Charlie survived but with massive brain injury he suffers from sight loss, cerebral palsy and developmental delays affecting his speech and ability.

Despite his difficulties Charlie tries so hard to make the most of life and faces everything with a smile. Tragically, Charlie's life expectancy could be affected and the best things we can do is keep him physically strong and help him to learn and communicate as best he can. Not only will this improve his prognosis but also his quality of life. We want Charlie to be as well as possible for as long as possible and thanks to intensive and ongoing therapy, he is making fantastic progress.

To celebrate his 5th Birthday we're abseiling down the Europa to fundraise for his ongoing therapy costs and to promote awareness of Strep B.

What is Strep B?

Strep B is a bacteria carried harmlessly by many adults, approximately 1 in 5 woman carry it during pregnancy and the majority go on to have perfectly healthy babies. It can exist in the birth canal and many babies are exposed at birth yet most are not affected at all. For a tiny percentage (less than 1 in 2,000)* it can cause problems. In the UK strep B is the biggest cause of death and disability in newborns yet there is a big lack of awareness.

While there are usually no symptoms in pregnancy, a swab (available privately for £30) can show if GBS is present and if so, antibiotics may be offered during labour to reduce the possibility of baby being affected.

While most babies will never become ill, for the minority that are affected the results can be devastating.

If a baby is unwell getting treatment quickly is absolutely crucial.

Appearance of Skin — Blue or gray or pale skin, blotchy or red skin, tense or bulging fontanel (soft spot on a baby’s head), infection (pus and/or red skin) at base of umbilical cord or in puncture wound on head from an internal fetal monitor

Eating and Sleeping Habits — Feeding poorly, refusing to eat, not waking for feedings, sleeping too much, difficulty being aroused

Body Temperature — Fever or low or unstable temperature, hands and feet may still feel cold even with a fever **

Charlie had several symptoms, he was pale, grunting, not feeding well, vomiting more than usual and was agitated. Unfortunately, despite seeking medical advice my concerns were dismissed. Over the next few hours he deteriorated. We are so lucky to have our beautiful boy and only wish the seriousness of his symptoms had been recognised sooner. It is possible that with prompt treatment Charlie could have made a full recovery or at the very least had less profound disabilities.

We can't change the past but we can make sure we give Charlie the best chance through therapies (costing an average of £500 a month) which are vital to give him a better quality of life. We have realised that as parents we take so much for granted, we know Charlie will always need one-to-one care and at 5 he still needs spoon fed and helped to walk but the smile on his face when he says a new word or can do something himself after weeks of practice reminds us what an amazing and precious boy we have....and we know our boy has a lot more to give which is why his therapies are so worthwhile and literally life saving!

We hope that in doing so and telling Charlie's story we can promote acceptance and understanding of disabilities and remind people that there is always hope, even with all the struggles Charlie faces, his determination and joy at living has taught us so much. Everyone, regardless of ability can have a fulfilling life and happiness and that's what we hope to give Charlie. We also hope by sharing this we raise awareness of GBS and help improve the chances of early intervention to improve the outcome for other babies too.

Many Thanks, your help makes a much bigger difference to Charlie than you'll ever know! xx

PS Don't forget to comment with the name of the person you're sponsoring so they know you've donated to them! Thanks for your support! 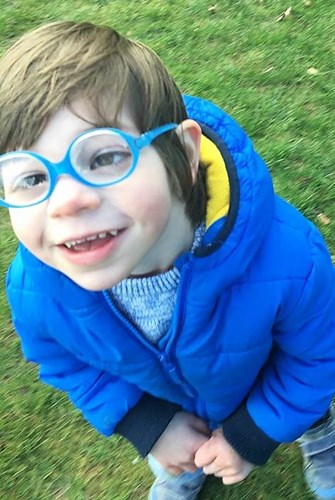