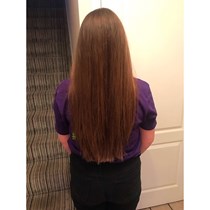 Theo's Warriors is a charity which supports children and their families through cancer diagnosis within the UK. This charity was set up by the family of a little boy named Theo who was diagnosed with Neuroblastoma at the age of five. Neuroblastoma is a rare cancer which only 100 children in the UK are diagnosed with each year.

In Theo's case, by the time they had found the cancer it had already spread to his bones, head, shoulders, legs and pelvis. Symptoms of the disease were only present for two weeks before he was diagnosed. So Theo was happy and healthy, then was unable to walk within two weeks. In most Neuroblastoma cases, by the time it is found, the cancer has already spread to the bones and tissue meaning that most children are stage 4 when the cancer us found which also means that surival rates are low.

After seventeen months of aggressive treatment, Theo and his family are in hope of him being cancer free.

As I feel this is such a worthy cause I will be donating my hair to the Little Princess Trust and all donations made will be given to Theo's Warriors to support children going through cancer treatment and their families.