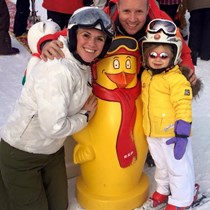 As teachers, there are always classes and pupils that leave a positive imprint on us. We enjoy hearing about past pupils' successes and personal journeys beyond the classroom. As Laura's class teacher from the age of nine to eleven, it was apparent what a special individual she was, so when I heard Laura's story there was no question that I felt compelled to do something to raise money for her cause. I hope as family, friends and colleagues past and present, you can dig deep to sponsor me on my challenge on the 15th June. I will be walking with a close group of friends and family, 40 miles non-stop across the Yorkshire Moors. Endeavouring to complete this challenge in less than 24 hours.

This is Laura's story from her family...

"Our beautiful daughter Laura started her first term at Kings College University in London studying International Relations in September, she'd worked so hard to get her 3 grade A's and was just getting used to student life when she started to suffer headaches, nothing serious just persistent and annoying headaches.

She went to the GP and he said to monitor the situation.

Laura joined the University Navy Corps and as part of the process she had a medical and an eye test. During the test the optician recognised abnormalities behind Laura's eyes and referred her to Moorfields Eye Hospital.

As the diligent student she is, she first went back to college to do a presentation on Iraq and then went on to hospital and was referred to a Neurologist.

The next day she became quite sick so her sister and I travelled down to London, arriving late on Tuesday night. We took one look at Laura and took her in a taxi straight to Homerton Hospital.

At 3am she went for a CT scan and an hour later, our lives changed forever as Laura was diagnosed with 2 brain tumours. She had a further MRI scan later that morning and it became apparent that she in fact had at least 6 brain tumours.

So 6 weeks after we had helped her get settled into her new university accommodation we had the heartbreaking task of packing up and bringing her home again.

Back in the North West, Laura met with a neurologist and it was decided that surgery needed to take place as soon as possible. The largest tumour was starting to cause seizures and pressure was dangerously high within the skull.

Surgery took place at Salford Royal and although she'd had a major seizure that morning, it went well and Laura made a good recovery from the craniotomy.

A week later, we got the pathology results and the worst possible news; Laura was diagnosed with Glioblastoma Multiforme, which is the most aggressive Stage 4 brain cancer.

We were devastated and horrified to find out that the prognosis was so poor with this disease, the most common length of survival following diagnosis is 12 to 15 months, with fewer than 3 to 5% of people surviving longer than five years. Without treatment, survival is typically just three months.

As a family we couldn't believe that our beautiful intelligent girl with so much life ahead of her, was basically facing a death sentence. It's just heart breaking.

So since surgery, Laura has had a gruelling 6 weeks of radiotherapy and oral chemo, she now gets a month off before starting a further 6 months of chemo (5 day each month).

We're also trying a huge range of supplements and repurposed drugs, anything we can find that has the slightest chance of stalling this disease and giving Laura the chance of a decent life.

In addition, we're also looking at other treatments that are still in the experimental phase, specifically immunotherapy treatments.

DCVax is a groundbreaking new treatment which creates personalised immune therapy made from each patient's own dendritic cells.

Dendritic cells are a type of immune cell that function to help the body's immune system recognise and attack tumour cells.

The results of the initial trial is really positive and is extending the overall survival rate for people like Laura.

Unfortunately for us, the DCVax treatment has yet to be approved by NICE so we would need to fund the whole treatment for Laura ourselves, the cost of this will be an initial £150,000 and a maintenance cost of about £26,000 per year which is a huge amount of money for any family to try to find.

We don't have a lot of time and we're doing everything we can, our wonderful friends in the running community and from Trawden AC have already made a great start to the campaign and have already raised well over £10,000 towards treatment but if you feel you could help by making a small donation, we would be so very grateful. #doingitforlaura"