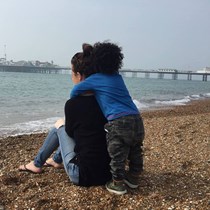 I am crowdfunding on behalf of my partner, Tino and our family. We are currently living in limbo, due to my partner’s immigration status. He currently has no status, is unable to work and has no recourse to public funds. I have known Tino since 2006, we have been in a relationship since 2011 and we have a lovely 22 month old son together whom we are trying to keep things 'normal' for. He is a very proud man, who is being worn down by the situation, feeling depressed and unable to sleep on a daily basis. I know that he wants to make our son proud and get things sorted for our son's future.

To give you some background:

My partner came to the UK from Angola in 1991 as an 11 year old boy, at the request of his father who was already settled here. They had a very limited relationship in Angola, and their relationship was very difficult after Tino moved into his home in East London. His father had a new wife and 3 more sons and it was made very clear from the outset that he was he was an outsider and was not wanted. The relationship detererioted further and by 15 he was living on the streets. At this stage he was still on his family visa.

Tino met his then partner and they had two children whom are now 17 and 18. When it came to applying for Indefinite Leave to remain, this was turned down and his Leave to Remain was only extended by a year. Meanwhile, his father’s new family had all been naturalised and had taken British citezenship. Extension to his leave to remain by a year at a time continued until 2005 when a further application for leave was made, this application was kept in limbo until 2012 when he was notified that the Home Office were making an application for his deportation as the Home Office felt this was 'conducive to the public good', regardless of Article 8 and the length of time he had been in the UK. During this period he was unable to work and again had no recourse to public funds.

A tribunal was held in August 2012 where the judge ruled against his deportation but again only granted him limited leave to remain. This was partly due the Home Office not filing all necessary documentation on time. Once this final period of leave to remain came to an end, he was informed that due to changes in requirements he was unable to reapply for another Residence Permit as he holds no Angolan passport. Having conversed with the Angolan embassy, they were unable to help as “They cannot prove he is Angolan, nor has he ever lived there as an adult.”

His representation previously was provided by BHT Immigration Legal Service, funding for Legal Aid in this instance is no longer available. When his file was collected from BHT it transpires, that there are a multitude of mistakes and discrepancies,along with the Home Office confirming that 1 of the 2 files relating to him have been 'permenantly lost'. There was no copies of any ID documents pertaining to Tino held in the file we now have. We were advised to seek advice from a charitable organisation who were unable to help and told Tino to effectively hide away from all authority as he would be taken to a deportation Centre, because where he is unable to reapply for a residence permit without a current passport 'he is an overstayer, who would be liable for deportation immediately'. An overstayer after 25 years!

We have since consulted another lawyer who feels that he can represent Tino for a figure of £800 plus Home Office fees of £2297. Having known Tino for nearly 12 years, I can honestly say he is one of the kindest, most genuine, and loveliest people you will meet. So hopefully, people will be able to help by any small amount so that we can get some certainty for our future, as a family, as opposed to just existing which is how we feel at the moment.

We are really just a normal family, me, my partner Tino and our gorgeous but very very cheeky bubba Jago!