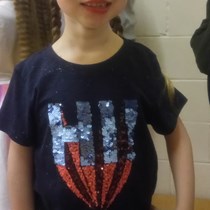 As many of you know, our beautiful liah was born with a congenital condition called arthrogryposis, which affected the growth and development of her joints and muscles in her arms. We all know that liah doesn't let ANYTHING stand in her way, and she tries to do everything she can to keep up with her friends, such as partaking in several dance classes (which she is amazing at!) learning to play the violin (on her lap) along with her classmates.

She has also learnt to walk, feed herself, tie her shoe laces, brush her teeth ad dress herself. When we received the news of liahs condition when she was a few weeks old, we were told that it would be unlikely she would ever be independent. Needless to say, we were so happy that those doctors were wrong!

Unfortunately, all of this has come at a cost to liah. She has problems with her back and shoulders due to her using 'trick' manoeuvres to make the world accessible to her, which means that her back and shoulders are very misaligned. This causes pressures on places on her body that shouldn't and causes her pain, including dibilitating migraines that no adult, never mind six year old, should have to bear, and there is nothing the NHS can do to correct these problems, so it's something liah will have to live with for the rest of her life. So it was suggested to us by her orthopaedic surgeon that we try an osteopath. Again, this is not a treatment available on the NHS, so will need to be paid for privately. The total amount on this page is the cost for a year's worth of sessions.

No one likes to see their child suffer, but unfortunately lots of the time liah does. She takes several medications and spends quite a bit of time having appointments in hospital. There is no cure for her condition, but my only hope is to make her life more comfortable